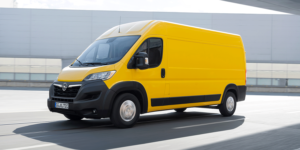 Opel has presented the new Movano, which will also be available as an all-electric version starting from the launch. The new generation of the large van is supposed to achieve top values in loading capacities and operating costs – but many key data are already known from the sister models.

For example, the load volume of 8 to 17 cubic metres (depending on the body variant) specified by Opel corresponds exactly to the values of the Peugeot e-Boxer. The similarity is also evident in the drive: the electric motor on the front axle has a maximum output of 90 kW and offers a torque of up to 260 Nm.

The two battery options also correspond to the French model pair (plus the Citroën ë-Jumper): the smaller battery comes to 37 kWh, the larger to 70 kWh. What is interesting, however, is the information on the range: while in the announcements on the two French models from 2020, according to the preliminary values, it was still said that the small battery pack offers for around 200 kilometres and the large storage for up to 340 kilometres according to WLTP. Opel now assumes significantly lower, but probably more realistic figures: The Movano-e with 37 kWh is given 117 kilometres, with 70 kWh it is 224 kilometres according to WLTP.

Another interesting difference is that, while Opel states the top speed in the announcement as 110 km/h without restrictions, for the e-Boxer this value only applies to the smaller models: the four-tonne variant reaches a maximum speed of 90 km/h. And while Opel suggests that customers can combine battery options with different body styles (quote ” depending on model variant and customer preference, a lithium-ion battery with 37 or 70 kWh capacity”), in the e-Boxer the battery is tied to the body length: L1 and L2 lengths have the small storage, L3 and L4 come with the large battery.

It is clear, however, that the batteries will not affect the cargo space, as they are installed in the vehicle floor between the axles. “Due to their location low in the vehicle, they also lower the centre of gravity – this is particularly noticeable in curves and in crosswinds,” promises Opel.

For the panel van, customers are to be able to choose between the aforementioned four lengths and three heights, resulting in the wide range of eight to 17 cubic metres of load volume. In the H3 height, the doors are 2.03 metres high, which Opel says is a best-in-class value. Depending on the variant, the loading sill is less than 50 centimetres high, the loading width is 1.42 metres between the wheel arches and 1.87 metres between the side walls. The permissible gross weight is between 2.8 and 4.0 tonnes, the maximum payload is 2.1 tonnes.

The Movano-e comes from the factory with a standard cabin that seats two passengers in addition to the driver. A double cab is available as an option, offering four additional seats in the second row. In addition to the panel van, there will also be a flat-floor chassis with various cab configurations for conversions such as tippers, platform trucks or campers. Whereby the WLTP ranges make use as a commercial vehicle at construction sites or in delivery services seem more realistic than a holiday mobile.

“With the new Movano-e, we are completing our range of electric commercial vehicles,” says Opel CEO Michael Lohscheller. “This means that our customers from the retail and trade sectors can be on the road with zero emissions. We are convinced that we will gain further market share for Opel with the new Movano generation.”

Opel has not yet announced prices and the exact date of the market launch.

Vauxhall is now accepting orders for the new Movano-e, which is priced from £61,085. Featuring a 122PS and 260Nm electric motor, the Movano-e is available with a 70kWh battery giving a 139-mile range under WLTP testing.

“With class-leading practicality and payload, alongside the latest safety features and technology, the All-New Movano and Movano-e are set to make an immediate impact in the large-LCV sector,” said Paul Willcox, managing director at Vauxhall, adding: “Vauxhall is leading the electrification of the UK van market and is all about democratising access to electrified vehicles.”

This is part of Vauxhall’s plan to sell only electrified vehicles in the UK as of 2028. With the introduction of the fully-electric Movano-e and Combo-e LCVs, Vauxhall will offer fully electric vans across its range by the end of 2021.

Vauxhall has updated the Movano-e to offer customers a larger 75 kWh battery, which replaces the 70 kWh option previously available. The new battery brings with it an improvement in range of up to 15 extra miles, allowing drivers to travel up to 154 miles (WLTP) from a single charge.

Technical improvements to the Movano-e’s electric architecture have also resulted in significant charging time improvements, with a 0-80% charge from a 22 kW AC charger now taking four hours (down from eight hours). The Movano-e also comes as standard with 50 kW DC (CCS) rapid charging capability, enabling a 0-80% charge to be completed in just one hour. Pricing remains unchanged from the previous 70kWh unit, despite the improvements in range and charging times.