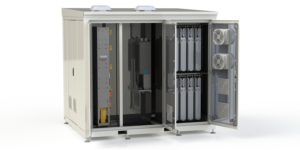 Skoda and the Czech technology company IBG Cesko are cooperating to use used batteries from the all-electric Enyaq iV and the PHEV models Superb iV and Octavia iV as stationary storage units at Škoda dealerships.

The energy storage system, manufactured together with IBG Cesko, can hold up to 20 batteries from the Superb iV and Octavia iV PHEV models, each with 13 kWh, or five 82 kWh batteries from the Enyaq iV BEV model. In total, the capacity of the system is up to 328 kWh.

According to a statement from Škoda, the storage system can be coupled with a charging station. This works for fast charging stations up to a capacity of 150 kW. Alternatively, dealers could also use the energy storage unit for intermediate storage of green electricity from PV systems, for example, to light and air-condition their premises.

According to Škoda, the energy storage system is individually scalable. The batteries used can be replaced in a few simple steps if necessary. The Czech carmaker expects that “more than 4,000 of these sustainable power stations could be created in the coming years”. According to the company, the current launch was preceded by a successful pilot project in Prague. In the meantime, the energy storage units are regularly available for authorised dealers. Škoda has received a total of 160 pre-orders from dealers in the Czech Republic, Germany, the Netherlands and Slovakia.

Batteries from test and pre-production vehicles will be used for the first examples of the new storage system; later, batteries from used production vehicles will be given a second life cycle. “Experience from the pilot project shows that the capacity of the batteries in the stationary storage systems only drops by around two per cent a year,” Škoda informs. The useful life of the batteries is thus extended to up to 15 years and the CO2 footprint is significantly improved.