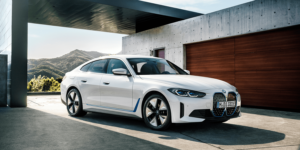 BMW unveiled the series design of the i4 in March as part of its digital annual press conference, but at the time did not provide any further figures beyond the known key data. The Munich-based company is now making up for this with plenty of information.

The BMW i4 eDrive 40 is to be launched as the base model in November 2021. Unlike the iX electric SUV that will also be available in November in two variants, the German carmaker has not yet revealed prices for the electric sedan. What the company has revealed is some detailed (but officially still preliminary) technical data.

The power from the 400-volt battery is used by a 250 kW electric motor on the rear axle of the basic model. All electric motors of the so-called “fifth-generation” at BMW (i.e. also those in the iX) do not require rare earths. The maximum torque is 430 Nm, the acceleration from standstill to 100 km/h is 5.7 seconds. The top speed is limited to 190 km/h.

BMW will offer the i4 M50 as the first electric car with the M logo. The 80.7 kWh battery is also installed here, but two motors are used. The electric motor on the rear axle produces a maximum of 230 kW, and the second electric motor on the front axle produces 190 kW. Together, this results in a system output of 400 kW, which is only available in ‘Sport Boost Mode’. In the ‘Comfort’, ‘Standard’ and ‘Sport’ modes it is 350 kW. The exact power curve – including the different characteristic curve for the Launch Control – can be seen in the infographic in the gallery. The standard sprint to 100 km/h is possible in 3.9 seconds with the 795 Nm of system torque and the software.

Interestingly, BMW relies on batteries that are adapted to the respective model. The i4 uses the aforementioned 80.9 kWh battery, while the iX xDrive 40 has a 71 kWh net power storage system installed. According to the Munich-based company, the i4 battery has been optimised for a low centre of gravity (5.3 centimetres lower than in a 3 Series) and the installation position, the cells are only 110 millimetres high.

Despite the ’40’ in the model designation, both the batteries and the drive philosophies differ: the ‘eDrive’ system of the i4 is an electric rear-wheel-drive, while the ‘xDrive’ of the iX is an electric all-wheel-drive. Only the system power is in the same order of magnitude, 240 kW for the iX and 250 kW for the i4.

The i4 also differs from the iX in terms of charging power and even charges slightly faster at peak than the iX xDrive 50 with its 105 kWh power storage unit: nominally, the i4 also reaches up to 200 kW. However, the charging curves published by BMW for the first time show that the i4 even peaks at 210 kW, while the iX manages no more than 195 kW. The i4 can hold the 200 kW up to around 25 per cent State of Charge (SoC), and then regulates in numerous small steps. The 150 kW is undercut at around 40 per cent SoC, and up to around 60 per cent the charging power is in the triple-digit range. Shortly before the 80 per cent mark, the power then drops to about 60 kW. Charging from ten to 80 per cent takes 31 minutes, which corresponds to an average charging power of 110 kW in this range.

In the range with the highest charging power, 164 kilometres of standard range are recharged in ten minutes in the i4 eDrive 40, and 140 kilometres in the i4 M50. That being said, these figures should be treated with caution, as they are based on preliminary data (BMW states the consumption of the i4 M50 within a range of 19 to 24 kWh/100km) and depend heavily on the driving profile. BMW says that the standard range for the i4 eDrive 40 is 590 kilometres, for the M50 it is 510 kilometres according to WLTP.

The M version differs not only in terms of the drive, the chassis has also been adapted for the sportier model with a wider track at the front and rear as well as air suspension on the rear axle. BMW says it has achieved a “unique overall vehicle harmony in the competitive environment through the integrated application of all drive and chassis components with the decades of know-how of an established manufacturer of particularly sporty premium cars”. The “brand-typical driving dynamics that go far beyond rapid straight-line acceleration” are combined with “superior long-distance comfort”. We are already looking forward to the first comparisons with the Tesla Model 3 Performance and other electric sedans in this performance class. According to rumours, Porsche is also working on a smaller electric sedan below the Taycan.

In one regard, neither a possible Porsche model nor the Model 3 will be able to keep up: BMW specifies a maximum towing capacity of 1,600 kilograms (75 kilograms drawbar load) for the i4. For the Model 3, the trailer coupling (max. 1,000 kilograms) was recently taken off the configurator and is currently probably only available by phone order. Incidentally, the i4’s load space holds between 470 and 1,290 litres, with an additional 75 kilogram roof load possible. The unladen weight of the base model is two tonnes, the payload 555 kilograms.

As mentioned, BMW has not yet published prices for the i4, but has mentioned some of the standard equipment. These include a factory-fitted electrically opening and closing tailgate, acoustic glazing, auxiliary heating and air conditioning as well as sports seats. In addition, there are to be some customisation options which will probably come with a long list of surcharges. BMW mentions, among other things, various leather trims, an ‘M Sport Package Pro’, a glass sliding sunroof or headlights with laser light technology. There will also be an optional ‘M Carbon Exterior Package’.

Update 02 June 2021: Shortly after the presentation, BMW also named the prices for the two variants of the i4. The i4 eDrive 40 will be listed at prices starting at £51,905 OTR. As the vehicle costs more than the £35,000 maximum eligibility for the plug-in car grant, this means i4 drivers in the UK will have to do without the government grant. The i4 M50 will start at £63,905, while the market launch for both versions of the i4 will begin in November 2021.

BMW iX to be delivered from November

Ein Kommentar zu “BMW i4 to launch with two variants”