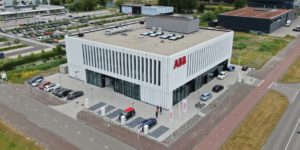 The Swedish-Swiss power and automation technology group ABB has announced that it will completely electrify its fleet of more than 10,000 vehicles by 2030. The company’s climate protection goals also include using only renewable energy, as well as establishing energy efficiency targets and energy management systems

In Sweden, ABB has already begun converting its approximately 700 company cars to all-electric vehicles. In the UK, ABB announced last year that it would convert its 500-plus company cars to a fully electric fleet as early as 2025.

Leading up to World Environment Day on June 5, ABB has announced that it has joined three initiatives run by the non-profit organisation The Climate Group. The first of these is the EV100 initiative that was founded by the Climate Group in 2017 with 10 corporations, including big players such as Deutsche Post DHL, Vattenfall, Baidu, Ikea and LeasePlan. The initial idea was to send a strong market message by pledging to decarbonise their fleets by 2030, which has certainly had a resounding effect. Now ABB has joined what has grown to currently over a hundred corporate members and the Swiss Swedish corporation has similarly pledged to electrify its fleet of more than 10,000 vehicles by 2030.

Finally, the third The Climate Group initiative joined by ABB is the EP100 initiative, with which ABB has committed to setting energy efficiency targets and further implementing energy management systems at company sites. The electric specialist company says that it already more than 100 ABB sites are covered by externally certified or self-declared energy management systems, according to the company.

Theodor Swedjemark, Chief Communications and Sustainability Officer said: “At ABB, we want to lead by example across our own operations and the confirmation that our ambitious targets are now scientifically verified is an important milestone for the company.”

Here, Swedjemark is referring to the fact that the company’s own reduction targets have now been recognised by the Science-Based Targets initiative (SBTi), which confirms that they are consistent with the 1.5°C scenario of the Paris Agreement.

As our readers well know, ABB is active in decarbonisation efforts around the globe with its products and services which are applied across transport and energy sectors. The company is almost as old as electrification itself, with a history that goes back to the 1890s when the respective Swiss and Swedish founding companies invented the three-phase system for generators, transformers and motors, and were the first to transmit high-voltage power. Now the Swiss-Swedish group is showing its commitment to mitigating climate change not only through its products and services but also through its own company behaviour and resources.