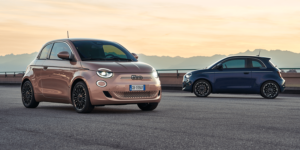 While Smart already offers exclusively electric cars, other manufacturers such as Volvo, Jaguar or even Mini have at least announced a conversion to electric cars. Now Fiat is also setting the course to become an all-electric car brand by 2030.

“Between 2025 and 2030, our product line-up will gradually become electric-only. This will be a radical change for Fiat,” Fiat CEO Olivier François announced at a discussion on the eve of World Environment Day 2021.

The goal, he said, was to use falling battery costs “bring to market electric cars that cost no more than those with an internal combustion engine”. François was not more specific, however.

Currently, the Stellantis brand only offers the Fiat 500 as a pure electric car. In addition, there is the E-Ducato van. The Panda could be the next pure electric vehicle: Fiat has reportedly already decided to put the Centoventi electric concept, unveiled in 2019, into series production.

Regarding Stellantis plans as a Group, in April, the new 14-brand car group revealed more details about its electrification plans. These include four platforms for electrified models and more battery factories. After all, Stellantis wants to boost sales of electrified cars in Europe sharply, from 14 per cent this year, equivalent to more than 400,000 vehicles, to up to 70 per cent in 2030. For the US, the plan calls for an increase from 4 per cent this year to 35 per cent by 2030.

In January of this year, PSA and FCA completed their merger, creating the Stellantis group. The merger has certainly had an impact on the electromobility development of these brands, as can be seen from the first details of the electrification plans, among other things. Apparently, it will not stop there, because Stellantis has already announced a “Stellantis Electrification Day” for 8 July 2021. Then there could certainly be more information about Fiat and its role in the transformation.

Nissan postpones ‘Ariya’ launch due to lack of chips