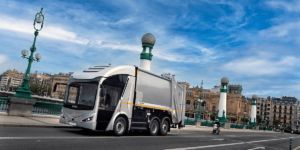 The Spanish manufacturer Irizar, known for its electric buses, has received the first order for ten of its electric truck, called Irizar ie truck, which will be presented in 2019. The ten Irizar ie trucks in two- and three-axle versions will be built for FCC Medio Ambiente and will be used for the collection of residual materials.

The platform of the electric truck is the result of a research project between Irizar and FFC, which had already produced the prototype of a refuse collection vehicle. FCC is a specialist in environmental services, water management and infrastructure.

While it was still said at the presentation of the prototype in 2019 that there would also be a natural gas range extender in addition to a purely battery-electric version, FFC has now ordered only battery trucks. Irizar does not provide any details on the exact data of the vehicles ordered in the announcement.

The two-axle 4×2 is available with a gross weight between 8.5 and 10.5 tonnes. Depending on the customer’s wishes, the battery can hold between 130 and 300 kWh, the latter being sufficient for up to 250 kilometres. Charging at 150 kW should take between one and two hours. The electric motor has an output of 160 kW.

The weight of the three-axle 6×2 is between 10.5 and 12.5 tonnes, and five different axle spacings are offered. The 240 kW electric motor draws its power from a 130 to 400 kWh battery, and the range is also given as a maximum of 250 kilometres. With the largest possible battery, however, the charging process takes three hours with up to 150 kW.

Both vehicles share the cabin, which was also developed with FCC input. It is said to feature particularly good oversight to make driving in inner cities safer. At 37 centimetres, the access height of the step is also very low.