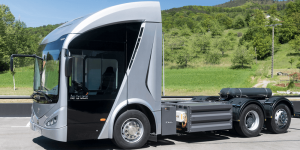 According to Irizar, different versions of the electric truck are currently in development. The company is still keeping a low profile with its performance data. The only insight the Spaniards provide is that the ie Truck is an eight-metre-long 6×2 electric vehicle with a payload of 18 tonnes.

The electric truck’s platform is the result of a research project between Irizar and the FFC Group, a specialist in environmental services, water management and infrastructure. According to Irizar, FFC’s contribution of know-how in the field of urban services has already resulted in the prototype of a refuse collection vehicle that the partners intend to bring to series production in the coming months.

In principle, the Irizar ie Truck adopts the technology developed in-house, which is also used in the manufacturer’s electric buses – above all in their drive systems, energy storage systems and control electronics elements. The truck was designed for urban and inter-urban settings in mind; the low noise level means for example that it can also be deployed at night reducing road congestion at peak times. The Spanish company claims that the Irizar ie has the lowest access height on the market. The electric version comes with a CNG range extender for inter-urban transport with enough electric range for routes within the city.

Almost a year ago, Irizar opened a plant in the northern Spanish city of Aduna with a focus on e-mobility. It initially has a production area of 18,000 square meters and a maximum capacity of 1,000 electric vehicles per year. Already at the inauguration, Irizar expressed its intention to produce not only electric buses but also other electric commercial city vehicles there.