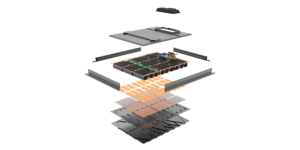 Engineering specialist IAV has developed a battery concept that is said to be significantly easier to recycle than existing battery systems and, on top of that, to have a considerably better CO2 balance.

According to the developer, batteries constructed according to the IAV method can be dismantled much more easily and with less effort, and the materials they contain can be used. Considered over the entire life cycle of a battery, up to 20 per cent of CO2 emissions could be saved with this method, according to IAV averaging.

The core element is a new battery housing and module concept. Instead of aluminium, IAV relies on steel here, as the steel can be “separated in the recycling process more easily and with less energy than aluminium”. IAV puts the additional weight at only one to one and a half per cent due to the consistent lightweight construction.

In addition to the material, the second major innovation is in the joining and connection technologies. “Hundreds of screws end up being used for the entire battery system, plus a lot of glueing and welding,” says Michael Clauß, specialist for battery development at IAV. However, conventional production processes and the materials used make it difficult to dismantle the batteries and recycle them correctly. “That’s why many batteries are shredded. Valuable materials and carrier elements that could be used in new batteries are thus lost.”

Instead of multiple screw solutions, glueing, and welding seams, IAV engineers have introduced new joining techniques. Wherever possible, click and plug connections are used. This means that the number of screw connections can be reduced by two thirds, and glueing and welding can also be significantly reduced.

“Thanks to the new design, recyclers can disassemble the battery system more easily and quickly,” says Clauß. “The design is such that robots can take over large parts of the work.” Disassembling different battery types, in particular, is an important factor in recycling – and thus also crucial for economic efficiency.

According to IAV, the concept is interesting for future vehicles and can also be integrated into existing electric vehicle models. According to Clauß, a battery adapted according to the concept could have the same dimensions and connections as before, “so it could be integrated into existing vehicle structures without any problems”. However, the new inner workings of the battery would simplify recycling. IAV does not mention possible effects on the energy density and cooling concepts in the press release.