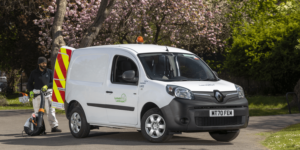 The Council of Lambeth has taken delivery of six Kangoo E-Tech vans in South London, Renault announced. The new zero-emission vans are the first the Council purchased and complement an all-electric Renault Zoe E-Tech car already in the fleet.

Lambeth, which is among the most polluted areas in London, wants to become a carbon-neutral borough by 2030. The Council also operates on a target of electrifying 30 per cent of its landscapes division fleet as part of a five-year Air Quality Action Plan.

The new Kangoo E-Tech vans that just arrived will be used by the landscape division staff for daily visits to council works across Lambeth’s 10.36 square miles. The existing Renault Zoe car is used by the department’s tree inspector.

Lambeth Council also installed 13 new 7-kW chargers at its five maintenance depots located throughout the borough. Using the wall boxes will charge the Renault Kangoo E-Tech to 100 per cent in six hours, according to the manufacturer. Renault claims a potential range of up to 143 miles (WLTP) for the van.

All the Kangoo E-Tech vans have been supplied in Business trim, which includes such standard features as electrically operated door mirrors and front windows, ABS with Electronic Brake Force Distribution, and USB connectivity, among other things.

Robert Presnall, Lambeth Landscapes Transport Manager, said: “For anything under 3.5t, we are now only considering electrified vehicles.” Looking at lower running cost, he added that it was “actually very hard to justify a diesel or petrol van of a similar size.”

The Kangoo E-Tech costs from £23,000, excluding VAT, after the Plug-in Van Grant. The offer is part of the Renault Pro+ range, which includes the Renault Master E-Tech and the Zoe Van E-Tech, which combines the equipment and 245-mile range of the passenger car version with a payload of 457kg in Business trim.