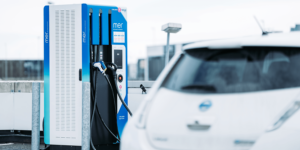 Mer, part of Norwegian energy giant Statkraft, only launched into the UK market in late April this year, initially as Gronn Kontakt UK. The company says it focuses on getting charging stations into businesses, organisations, key retail locations and into areas managed by local authorities where there will be high usage.

Mer UK Managing Director, Anthony Hinde, coming from the country with the world’s largest number of electric cars per capita, explains: “The lessons we have learned from Norway – where the majority of new car sales are now electric – is that installing EV chargers into workplaces and more broadly into community locations, and switching fleet vehicles to electric, will be a critical element to the success of the green-vehicle transition.”

Commenting on the new partnership with Shell’s NewMotion, Hind added, “we have to forge partnerships like this one so drivers can be confident they can charge quickly and easily at any station without needing to carry multiple memberships. We are committed to this and working with numerous partners to execute many such agreements, focussing on the drivers.”

Alan McCleave, Regional Manager UK and Nordics at NewMotion, echoed the sentiment when he said, “providing easy access to public charge points via roaming is important for a seamless EV charging experience, lowering the barrier to e-mobility.” The company claims to be working with over 200 roaming partners in Europe and 20 in the UK, including Mer.

One of the recent partnerships in the UK included the British charge point operator Osprey Charging, formerly known as Engenie.

NewMotion has been on a steep expansion course ever since they were acquired by Shell in 2017. They now offer a variety of charging solutions and partner for roaming agreements. Cooperations from beyond the UK border such include Vattenfall, who is using the company to help gain a foothold on the island.

NewMotion recently connected their 170,000th charge point to their roaming network and now claims over 3,000 charging locations in the UK.