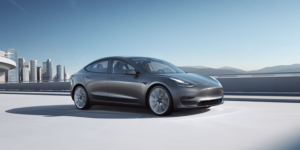 Tesla significantly increased deliveries of its electric cars produced in China in May after a surprising decline in April. According to figures from the China Passenger Car Association (CPCA), Tesla delivered 33,463 Model 3 and Model Y from the Gigafactory in Shanghai in May.

Exactly 11,527 of these cars were exported, corresponding to 21,936 locally produced electric cars Tesla delivered in China in May. By comparison, Tesla delivered 25,845 cars from Shanghai in April – including 14,174 for export and only 11,671 for domestic sales. The sharp decline in April was puzzling. Some Twitter users wrote that the production line for the Model Y had been shut down for a fortnight, citing Tesla’s Chinese PR department. However, it has not been confirmed whether this is the reason.

With the May figures for China, Tesla has now resumed its steadily rising annual statistics. In March, the electric carmaker set its latest record with around 35,500 electric cars delivered. At the time, Tesla sold 25,327 Model 3s and 10,151 Model Ys. According to the CPCA, 20,735 Model 3s and 12,728 Model Ys were among the 33,463 vehicles delivered in May. However, only Model 3 vehicles are said to have been exported in May.

The Tesla plant in Shanghai is designed for a maximum of 500,000 vehicles; in the current expansion stage, 450,000 Model 3 and Model Y units can be built per year. Tesla’s sales in China amounted to around three billion US dollars in the first quarter of 2021. This is not only a threefold increase compared to Q1 2020 but already accounts for almost a third of total sales. Tesla had sales of $10.39 billion in the first quarter, according to the annual report.

However, Tesla has apparently put plans to buy additional land on hold to expand its Shanghai plant and make it a global export centre. According to media reports, the background is the political situation between China and the USA. So production capacity is capped: Some of the space currently used as a car park could still be used for production facilities to get to said maximum capacity of 500,000 vehicles. By expanding the plant through the purchase of additional land, Tesla could have increased production by 200,000 to 300,000 additional electric cars.

Ford is launching the Maverick hybrid in 2022