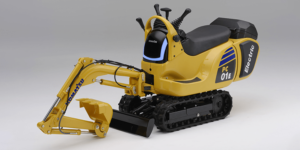 Honda and Komatsu have announced the start of joint development of electrified micro excavators with replaceable batteries. In addition to the excavator, a battery swapping system for the construction industry will also be developed.

This will use the Honda Mobile Power Pack (MPP), first introduced in 2018. Also planned is the establishment of a battery sharing system for the construction industry, which will enable the mutual use of the MPP for different types of construction equipment and machinery. Details and timetables for this sharing system, such as the calculated investments, have not yet been named by the two companies.

In a first step, both companies want to electrify the Komatsu PC01 micro excavator and equip it with the Honda battery system. As can be seen in the published pictures, the two Japanese companies have already built a prototype. However, there are no details on its functional scope and proximity to series production. All that is known is that the Komatsu PC01 with Honda batteries is to be launched on the market in the current financial year, i.e. by the end of March 2022.

Honda had actually developed the MPP for use in two- or three-wheeled scooters. Since the introduction of the interchangeable batteries, several of these vehicles have also been launched. The use in “smaller vehicles” was also mentioned as a possibility from the beginning – but this was initially about quads, not excavators.