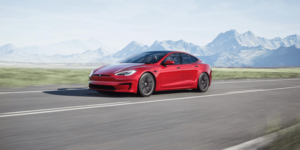 Tesla handed over the first 25 examples of the Plaid version of the revised Model S at an event in Fremont and revealed more details about the vehicle. However, the price was also raised.

The performance data of the Model S Plaid with now three engines had been known in essence since the presentation of the updated models of the Model S and Model X in January. As part of the handover of the first vehicles, Tesla has adjusted some of the technical data of the new top model in the series. As reported, Elon Musk had cancelled the originally announced top version Plaid+ a few days ago – on the grounds that the Plaid model was “too good”.

For example, Tesla now claims that the acceleration from 0 to 60 mph (i.e. 96 km/h) is 1.99 seconds. Previously, it was 2.1 seconds for the Plaid and “less than 2.1 seconds” for the Plaid+ – but according to the German Tesla page to 100 km/h. So comparisons are difficult – especially since Tesla gives the values with a rolling start, so the data are not comparable with the values according to the standing start tests commonly used in Europe.

The drive is said to be distinguished not only by the new configuration with three motors – two on the rear axle, one on the front axle – but also by a newly developed motor. This was developed as part of the ‘Palladium’ project and has a rotor wrapped in carbon. This is supposed to increase the power density while maintaining high efficiency. According to a graphic released by Tesla, the new motor should not only offer more power, but also be able to maintain it consistently – whereas the 2019 performance model or a 2018 P100D lose power at higher speeds.

“To the best of our knowledge, this is the first time there has been a production electric motor with a carbon wrapped rotor,” Elon Musk said during the event. “This is very difficult because carbon and copper have very different thermal expansion rates. To have a carbon wrapped rotor, you have to wind it up with extremely high voltage, and that’s an extremely difficult thing to do.”

At a Supercharger, the Model S Plaid’s battery – presumably based on improved 18650 cells – should be able to recharge energy for 300 kilometres in 15 minutes. Tesla’s V3 Superchargers currently allow charging powers of up to 250 kW. Musk stated at the event that he wants to gradually increase the power up to 350 kW – but he did not give a timetable for this and which vehicles will support these powers.

In order to reduce fuel consumption, Tesla has, among other things, also further developed the aerodynamics – the Americans now state that the air resistance is 0.208, which is almost at the level of the Mercedes EQS. In addition, a newly developed heat pump is supposed to contribute to the vehicle’s efficiency, especially in colder climates.

Other features such as the new interior with three displays, the “Auto-Shift” function (where the vehicle predicts which gear to engage) and the Yoke steering wheel were already known.

According to Musk, Tesla initially wants to produce “a few hundred units” per week. In the third quarter, production is then to be ramped up to 1,000 units per week. This would bring Tesla to over 12,000 Model S Plaid per quarter. Musk did not specify when the long-range version with two engines and the Model X with the two powertrains would be added.

Jaguar announces 2022 I-Pace for the USA