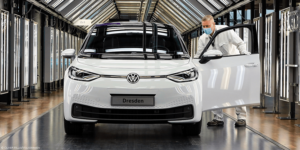 Due to the high demand for electric cars, the board of the Volkswagen brand has decided to take an unusual step. The carmaker’s 18,000 or so executives are temporarily no longer allowed to order pure battery-electric vehicles as company cars.

Instead, the VW staff has to opt for a plug-in hybrid or conventional car, according to a report in Spiegel. The magazine quotes from an internal memo Volkswagen sent to those entitled to a company car.

Electric car production is running at full capacity, wrote the company. “For this reason, the delivery times for our vehicles are currently significantly longer.” Therefore, employees waiting for an electric car are being pushed back on the waitlist, allowing customers to come first, with internal deliveries likely only taking up again in Q4.

This was a u-turn from previous instructions when Volkswagen asked its executives to lead by example and be the first to order VW electric cars.

However, the brand is currently producing the VW ID.3 in Germany at its plants in Zwickau and Dresden, in relatively small numbers. Manufacturing is also underway in China at the joint facilities with SAIC and JAC. In November last year, VW even rekindled rumours to have JAC to build a low-cost EV in China for export to Europe.

Small electric cars – read affordable – prove successful for the Volkswagen Group so far. So much so, the Group decided to take the Škoda Citigo-e iV out of circulation last September. VW also imposed a temporary order stop for the e-Up in Germany, also due to high demand.

VW at the time told electrive, “Due to the sharp increase in demand for e-vehicles, we have decided to adjust our offer in Germany and temporarily remove the small car e-Up! with current delivery times of 16 months from our order offer.” The spokesperson added the company was instead focusing on quickly available e-vehicles, referring to the ID.3 and various PHEV models. Now it looks as if these are selling out a little too quickly as well.

It’s hard to practice what you preach