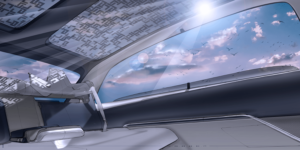 By the middle of the decade, Lincoln expects half of its global sales volume to consist of all-electric cars. Currently, the brand only offers the Aviator and Corsair SUV models as plug-in hybrids. The first all-electric Lincoln is expected to be unveiled next year and sold in North America and China. It will be built on a new stand-alone BEV platform, on the basis of which three more electric Lincoln models are planned in the coming years. Lincoln does not go into further detail here, only saying that the first electric car will borrow design cues from the Zephyr Reflection concept unveiled in Shanghai earlier this year.

The brand’s electrification strategy is part of the Ford+ plan, which now calls for more than $30 billion in investments to electrify the group’s model lineup by 2025. That is eight billion dollars more than previously budgeted. The US automaker announced the budget increase in late May, along with the introduction of two new platforms for BEV vehicles: a modular platform for volume models such as cars, SUVs, pickup trucks and delivery vehicles that enables rear- and all-wheel drive, and another dedicated platform for large pickup trucks.

In Europe, Ford is also known to use Volkswagen’s MEB platform. The electric vehicle lineup is expected to grow based on these platforms, according to the Ford+ plan. Freshly confirmed is an electric version of Ford’s Explorer SUV. According to information from the end of March, the identical Lincoln SUV Aviator could also receive an all-electric offshoot, which would then already represent one of the four announced BEVs although this has not been confirmed.

The Bronco and Ranger pickup models could also get electric offshoots. All this is suggested by some graphics shown to Ford investors in May. But again, official confirmation is lacking. So far, Ford’s sole presence in the passenger car segment is the Mustang Mach-E in the electric market. In 2022, the recently unveiled F-150 Lightning is expected to follow.

“As we accelerate Lincoln’s transformation in North America and China, there is no better time to propel the Lincoln brand forward with electrification,” says Joy Falotico, president of Lincoln. The company plans to focus further on connected services and autonomous driving.

Mazda plans its own electric platform for 2025

Audi to release only battery-electric models from 2026