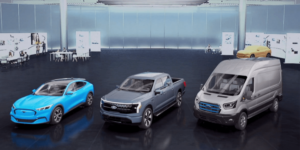 Ford has detailed the acceleration of its electrification and other plans in a new roadmap called ‘Ford+’. In addition to the expansion of the budget mentioned, the American company also stated the goal of selling about 40 per cent of vehicles with purely electric drives by 2030.

To this end, the manufacturer announced two new platforms for BEV vehicles: a modular platform for volume models such as cars, SUVs, pickup trucks and delivery vehicles that enables rear- and all-wheel drive, and another special platform for large pickup trucks. In Europe, Ford is also known to use Volkswagen’s MEB modular system.

The electric vehicle range is to grow on the basis of these platforms. An electric version of Ford’s Explorer SUV has just been confirmed. Visual presentations made for the investros suggest that the identical Lincoln SUV Aviator may also be electrified, as well as the pickup models Bronco and Ranger. That being said, there was no outspoken official confirmation of these plans. So far, Ford is alone in the passenger car segment in the electric market with the Mustang Mach-E. The F-150 Lightning that was unveiled a week ago is to follow in 2022. According to Ford, 70,000 reservations for the electric pickup truck have been received in the past seven days.

As far as the battery cells for the vehicles are concerned, Ford wants to rely on three pillars in future: under the name ‘IonBoost’ on lithium-ion cells with high energy density for passenger cars, under the name ‘IonBoost Pro’ on LFP cells for commercial vehicles and on solid-state cells from the company Solid Power, in which Ford has recently invested further, just like BMW. By 2030, Ford expects annual battery demand for its electric vehicles to be up to 140 GWh in North America and up to 240 GWh worldwide. This is roughly equivalent to the capacity of ten plants, according to a recent statement from the company’s headquarters. From the current presentation, it can be deduced that three of these could be built in Europe.

Ford also explained to investors that battery costs are expected to fall by 40 per cent to $100/kWh by the middle of the decade and further to $80/kWh by 2030. The US company also mentioned all the steps it has recently taken to “vertically integrate battery technology”, i.e.: to develop and produce batteries in the future. These include the establishment of a global battery competence centre called Ford Ion Park in the US state of Michigan, where lithium-ion and solid-state batteries are to be developed and manufactured in small series. Likewise, the planned establishment of a joint venture with SK Innovation for the production of battery cells and modules called BlueOvalSK aims to achieve an annual production capacity of 60 GWh.

In addition to electrification, the Ford+ roadmap also focuses on connectivity, commercial vehicles and autonomous driving. The manufacturer is also planning to create a business unit called Ford Pro, which will focus on commercial and government customers in the service and sales field. In the future, this division will also provide B2B customers with flexible offers for electric commercial vehicles and charging infrastructure solutions, among other things.