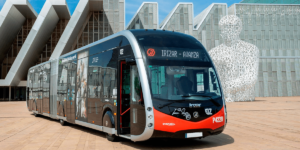 The Spanish city of Zaragoza has ordered 68 electric buses from Irizar, including 51 solo and 17 articulated buses. Irizar says it is the largest e-bus order to date. Public transport operator Avanza will put the e-buses into operation from late 2022.

Zaragoza opted for the Irizar ie, a 100% electric bendy bus in the design of a tram. Avanza will test the vehicle over the next three weeks and run it on different lines to see whether it can replace double-deckers. The articulated version measures 18 metres and has a capacity of 145 people. Irizar claims it developed and manufactures Lithium-Ion batteries in-house.

The Zaragoza government had recently decided that all new buses should be electric. The city currently has four electric and 111 hybrid buses. The remaining 352 buses still run on diesel.

The transition towards an electric fleet aligns with the Recovery, Transformation and Resilience Plan under the Next Generation EU package. The fleet renewal is therefore eligible for European funding as long as European company supplies these buses. This was a major factor in Zaragoza City Council’s decision to go for Irizar’s ie tram, the company states.

The Spanish manufacturer also received orders from other cities in Spain, namely Barcelona and Madrid as part of larger tenders.

Irizar has been making electric buses at a dedicated facility in Spain since 2018.

In the meantime, Irizar has delivered the first of the 68 ordered vehicles in Zaragoza. As reported above, this is the ie tram model. The first model is one of the 51 twelve-metre models. The battery has an energy content of 430 kWh, which should be enough for 220 kilometres. Charging is done by cable or inverted pantograph, the power of the electric drive system is 240 kW.

Irizar has also received another, albeit smaller, electric bus order from Spain. The city of Irun has placed an order with Irizar for four electric buses including charging infrastructure. Deliveries are scheduled for mid-2023. This is also the ie tram in tram design, not the ie bus solo bus.

Irizar received further orders for 90 and 30 electric buses from Madrid and Valladolid in May and June of this year.

National Grid pledges fleet electrification in the US & UK