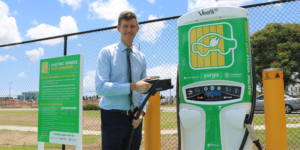 The Queensland Government has announced new funding to expand the existing fast-charging network lining the Queensland coast. The new move will take the so-called Electric Super Highway into the regional Outback.

The Queensland Government will almost double the length of Queensland’s Electric Super Highway with a $2.75 million commitment to deliver 18 new charging sites across the Australian state.

The extension will effectively take the charging network inland and into the North-West of the state, extending the length of the ‘highway’ by a further 1,800km to a total of 3,800km. In chargers, the network now includes thirty-one chargers as part of an earlier roll-out, with the additional commitment seeing it grow to a network of 49 fast-chargers.

Transport and Main Roads Minister Mark Bailey said, “Sending the QESH out west not only puts EV charging on the map in regional Queensland but supports the drive tourism market too.” He also pointed to domestic demand with electric vehicles sales in Queensland having increased more than 1,037 per cent – from 417 to 4,743 units – since 2017, putting the use of the QESH at an “all-time high”.

The fast-chargers have been built at intervals of around 100 to 200 km along the Queensland east coast. Charging costs 20 cents per kWh, making the network one of the cheaper charging options currently available in Australia.

Earlier deployments used chargers from Tritium, the Australian company specialising in fast chargers and up to high power charging equipment and the new charging stations on the QESH appear to be from Tritium’s Veefil line as well.

Judging further by the images, Chargefox and its partner Yurika continue to operate and service the network as was announced in 2019. In addition, Chargefox has a partnership with Tritium to supply chargers for Chargefox to operate. Tritium chargers make up about 70% of publicly available chargers in Australia.