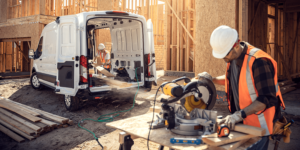 Ahead of Ford’s first all-electric van, the Ford E-Transit, hitting the market in spring 2022, the company ran a series of tests. The latest trials included hard use cases in simulated real-life commercial applications.

In a video, Ford provides impressions of the climate and durability tests to which the different pre-production variants of the new E-Transit were subjected at its facilities in Europe and North America.

Challenges included winter driving conditions in Michigan, US or simulated extreme heat, cold and altitude in Ford’s Environmental Test Chamber in Cologne, Germany. The test chamber can recreate conditions over 40 degrees Celsius for two weeks using 28 spotlights with 4,000-watt bulbs. The van also had to function at -35 degrees Celsius.

The company also took the Ford E-Transit through what it calls “giant potholes and rough road surfaces” at its Lommel Proving Ground in Belgium.

Ford says its engineers thus stimulated the effects of more than 240,000 kilometres of driving or “a decade of hard work,” so Ford. Here are some impressions:

The internal testing precedes real-world trials at customers currently in preparation. Ford clients in the UK, Norway, and Germany expect to integrate the E-Transit vans into regular operations by late summer this year. Ford scheduled further testing in the US as well.

Ford engineers say they will use data from the trials to help refine E‑Transit’s vehicle technology, specifically with a view to range management. In addition, the carmaker acquired Electriphi just this week, a company specialising in charge management for commercial fleets. The deal was made through Ford Pro, a new business unit for commercial customers.

The prototypes in the tests largely follow the E-Transit versions presented last November. However, the cab conversions point to Ford moving closer to various requirements, and the company said it considered a “wide range of operating scenarios” and that it would offer European clients a “generous choice” of bodies and Gross Vehicle Mass options from launch, resulting in 25 possible variants. At the US launch, the talk was of eight variants.