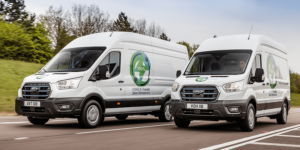 Ford is preparing European trials with its incoming e-Transit van. The now electrified classic will enter real-world operations at clients in the UK, Norway, and Germany by late summer this year. Ford scheduled further testing in the US as well.

The trials will include the all-electric Ford E-Transit van and look at last-mile and supermarket delivery operators and utility providers. Ford did not disclose any names but said it would enter prototypes into customer fleets with cab conversions, including refrigerated bodies, box vans, dropsides and interior racking.

“Real-world trials are an important step on our journey to deliver the all-electric E‑Transit and will give us an even better understanding of how to help customers across different industries enhance their productivity using zero-emission power,” said Andrew Mottram, E-Transit chief programme engineer, Commercial Vehicles, Ford of Europe.

Ford engineers will use data from the trials to help refine E‑Transit’s vehicle technology, specifically with a view to range management. The summer trials precede a planned launch of the Ford E-Transit van this autumn.

The prototypes largely follow the E-Transit versions presented last November. However, the cab conversions point to Ford moving closer to various client requirements, and the company said it considered a “wide range of operating scenarios” and that it would offer European clients a “generous choice” of bodies and Gross Vehicle Mass options from launch, resulting in 25 possible variants. At the US launch, the talk was of eight variants.


The electric van’s load area is the same as in the diesel-powered Transit models. An onboard system delivers up to 2.3 kW through standard plugs to power conversions and equipment in the cab and load area. Ford anticipates a payload of up to 1,616 kg for vans and 1,967 kg for chassis cab models.

E-Transit’s all-electric powertrain delivers up to 200 kW of power for a targeted WLTP range of up to 350 km. This, however, is for the European versions only. At the US launch in November, Ford specified a range of up to 126 miles, or 203 kilometres, for the low roof version. It remains unclear which version the 350 km is referring to or how this increase would come to pass, apart from EPA vs WLTP measures. In its latest communications, Ford only mentions “two range-boosting technologies” including Eco Mode and Scheduled Pre-Conditioning.

Ford expects the service cost of ownership to be approximately 40 per cent lower than internal combustion engine-equipped models due to lower maintenance expenses.

For Europe, Ford will manufacture the e-Transit at the Ford Otosan plant in Kocaeli, Turkey. According to Ford, the assembly is to take place on a separate line. The same plant will also build the Transit Custom Plug-in Hybrid, which is already available.

The company has yet to name prices for Europe. In the US, Ford is aiming for prices below 45,000 dollars for the electric van.

The e-Transit for North America will be built in Kansas City, where Ford is investing €100Mn in the conversion of the production facilities.