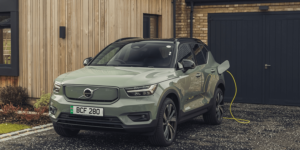 The Volvo XC40 Recharge first went on sale in the UK for £53,155 in March 2020 and arrived at dealers in late 2020. The XC40 was not eligible for the £3,000 Plug-in Car Grant (PiCG) because it cost more than £50,000, presumably why Volvo is now offering different versions that include one version just under that limit. When the model was first offered in the UK Volvo was only offering the R-Design trim in left-hand drive.

Volvo revealed the details of its first fully electric car at the end of 2019. Very briefly, the XC40 is a fully electric all-wheel-drive with 300 kW peak power, and Volvo gave a WLTP range of over 400 kilometres (roughly 249 miles). The powertrain features a 78kWh lithium-ion battery and twin electric motors, providing all-wheel drive as standard. The combined motor output is 408hp, enabling acceleration from zero to 62mph in just 4.9 seconds.

When the XC40 was released in Canada and the USA, Volvo did not give a range for the car in their press releases. This is because there some discrepancy between WTLP and EPA ranges, and both Volvo and Polestar cars were given less range by the EPA than expected. The EPA rated the Volvo XC40 Recharge with 208 miles (335 km).

The XC40 Recharge Twin Plus enjoys the addition of front parking sensors and a rear parking camera. This version focuses on extra cabin comfort.

The most luxurious version, the XC40 Twin Recharge Pro, comes with driver-assistance technology, with features like adaptive cruise control and steering assistance. Here drivers can also make use of features like a 360-degree parking camera system, along with more cosmetic elements such as 20-inch alloy wheels, auto-dimming door mirrors and leather/nubuck upholstery.

In the UK, Volvo is also offering subscription packages for £619  and £769 a month depending on the conditions.