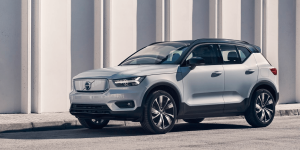 Volvo presented its first battery-electric car, based on the compact SUV XC40. The model aptly named Recharge uses much technology from the Polestar 2, but it will be almost a year before the car is on the road.

However, Volvo is still hesitant about the technical data for the electric car in the press release. Only a fully electric all-wheel drive with 300 kW peak power and a WLTP range of over 400 kilometres are mentioned. Besides, the unspecified battery should be able to be charged 80 per cent in 40 minutes at a fast-charging station.

The values are thus similar to those of the Polestar 2 – after all, both vehicles sit on the CMA (Common Modular Architecture) platform developed by Volvo and Geely. And the Polestar 2 in the 300 kW model is also equipped with a 78 kWh battery that can be charged with up to 150 kW DC and 11 kW AC. The system torque is 660 Nm – which also applies to the new Volvo XC40 Recharge.

The electric XC40 also takes over development at another point, which will first be launched on the market in Polestar 2: Volvo’s own Sensus navigation system will be discarded and replaced by a new infotainment system based on the Android operating system. In an interview with electrive.net (in German), Polestar CEO Thomas Ingenlath recently gave some interesting insights into the cooperation with Google on the User Experience in the car.

Visually, the fully electric XC40 hardly differs from the other variants of the model; at first glance, the closed radiator grille is particularly noticeable. But with darker paintwork than in the previously published pictures, this feature should also be more discreet. As one of the few electric cars on mixed platforms with combustion engines, the XC40 Recharge will have a “frunk” under the front bonnet – for the charging cable, however, the storage compartment seems only practical to a limited extent, because the charging socket is not located at the front, but instead replaces the tank nozzle above the left rear wheel.

The name “Recharge” will be used more frequently in the future because it is not only the sales name for the all-electric XC40 but will also appear in the name of all Volvos with charging cables – both BEV and PHEV. Volvo expects a lot from the Recharge models: Volvo Cars says it will present a fully electric car every year for the next five years. As early as 2025, half of Volvo’s worldwide vehicle sales will be accounted for by electric cars, the rest by hybrid vehicles. As soon as 2020, the Swedes are targeting that every fifth vehicle should have a plug-in drive.


“We have already said this several times: Volvo’s future is electric,” says Volvo CEO Håkan Samuelsson. “Today we are taking another important step in this direction with the introduction of the all-electric Volvo XC40 and the Recharge model line”.

As part of this, there will be an important change on the company’s homepage at the beginning of 2020. Every visitor will then be prompted whether they want a Volvo Recharge. The mild hybrids will thus only be found via a detour.

Shortly before the introduction of the XC40 Recharge, Volvo Cars had also published plans according to which the carmaker wants to be a climate-neutral company by 2040. In a first step, the CO2 balance of each Volvo model is to be reduced by 40 per cent over its entire life cycle by 2025 compared to the values for 2018. Production is also to be climate-neutral by 2025. According to Samuelsson, they also want to “encourage our suppliers and the energy sector to work together with us to achieve a climate-neutral future”.
An important component of the project is the aforementioned 50 per cent share of electric cars by 2025. In order to meet the already growing demand for PHEV models, the Swedes want to triple production capacities for electrified vehicles. PHEV customers want to motivate Volvo in future to use the purely electric “Pure” driving mode as often as possible. To this end, Volvo Cars is currently preparing an offer “designed to reduce individual operating costs and thus further increase sustainability”. We are curious to see what this offer will look like.

In addition, some Recharge models will have special “Designer’s Choice” variants – the models with preconfigured equipment will “considerably shorten” delivery times. For the time being, however, this only applies to the plug-in hybrids, because customers will have to wait a while for the XC40 Recharge. Production of the first electric Volvo will not start until autumn 2020, according to the press release. Prices for the XC40 Recharge are not yet quoted by Volvo.