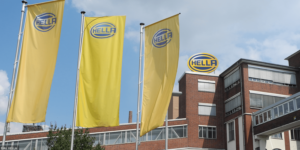 The German automotive supplier Hella and China’s Evergrande Group intend to jointly push the development and production of battery management systems, particularly for the Chinese market, as part of their new joint venture Hella Evergrande Electronics.

The joint venture, founded in 2020 and headquartered in Shenzhen, China, employs around 90 people, with plans to expand the number to around 200 by the end of 2023. As part of the collaboration, Evergrande will contribute its expertise in battery production and application know-how. In contrast, Hella will primarily contribute its experience in battery electronics as well as system integration. In this way, “high-quality battery management systems are to be developed at high speed.”

Evergrande is pursuing very ambitious electric car plans itself and had announced its first six models last year. The Chinese group originally grew up with real estate and now wants to become one of the largest producers of New Energy Vehicles. Up to now, Evergrande has mainly purchased know-how either by means of a takeover as in the case of NEVS, by partial entry as in the case of Koenigsegg, by means of joint ventures as in the case of Hofer or by cooperation as in the case of FEV Group, EDAG, IAV Group, AVL and Magna. Evergrande recently raised billions of euros in capital by selling treasury shares to a number of external investors.

Now the Chinese group is taking a further step using the intensified cooperation utilizing the joint venture with Hella. The German supplier has already been active in the BMS business since 2016. In spring of this year, Hella brought the latest generation of its high-voltage battery management systems into series production for a German premium manufacturer. The BMS, which will be manufactured by Hella Evergrande Electronics in the future, will be supplied to Evergrande’s electric car brand Evergrande New Energy Auto and other OEMs and suppliers.

“China is an essential key market for us further to expand our activities in the field of battery electronics and to shape the topic of electromobility proactively,” says Björn Twiehaus, who, as a member of the Hella Management Board, is responsible for the Electronics division. “By partnering with Evergrande, we are simultaneously strengthening our market access in China and further expanding our leading technology position.”

High-voltage battery management systems are characterised by ensuring the safe and reliable functioning of lithium-ion batteries in e-vehicles by measuring the battery’s voltage, temperature, and current, among other things.