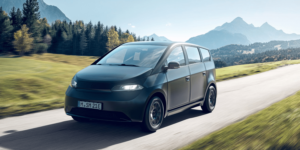 The German startup Sono Motors is significantly upgrading its Sion solar electric car. Instead of the previously planned 35 kWh battery capacity, the Sion will get a 54 kWh battery with LFP technology. The solar electric car’s price of 25,500 euros (including German VAT) is to remain unchanged.

“In our survey, more than 90% of our existing reservation holders voted for a more powerful battery,” said Laurin Hahn, CEO of Sono Motors. “This move is just another example of how Sono Motors is continuing to drive innovation and sustainability, whilst responding to the wishes of our community throughout the development of the Sion. Boasting greater capacity, greater range, faster charging, enhanced safety features and no cobalt, nickel or manganese usage, this improved battery will strengthen the Sion’s unique market position even further,” Hahn continued.

By installing a lithium iron phosphate battery, Sion also promises longer service life with up to 3,000 cycles or up to 900,000 kilometres. In addition, battery safety is expected to increase in terms of flammability. Markus Volmer, who has been the company’s Chief Technology Officer at Sono Motors since March this year explained: “The growing EV market is generating enormous demand for longer-lasting, more sustainable batteries. This enhanced battery enables Sion drivers to extend the time between charges, whilst reducing the charging time itself. This effectively optimizes the Sion to deliver easy and affordable sustainable mobility for everyone.”

Sono Motors introduced its solar electric car to the public back in 2017. To date, the Munich-based company says it has received more than 13,000 B2C reservations for the Sion. The company expects production to start at contract manufacturer National Electric Vehicle Sweden (NEVS) in Trollhättan, Sweden, in the first half of 2023.

The solar car’s market debut has been postponed several times. Last year, Sono Motors was faced with running out of money. However, a large-scale crowdfunding campaign succeeded in overcoming the liquidity bottleneck raising 53 million euros.

Meanwhile, the circle of partners and potential B2B customers is growing: In February, the startup, founded in 2016, announced that it had signed a cooperation agreement with the German electric car rental company UFODrive. Accordingly, the Sion is to become part of UFODrive’s fleet in the future. In May, the Munich-based company also reached an agreement with MAN Truck & Bus to investigate the technical and economic feasibility of integrating its solar technology on MAN’s eTGE electric van.