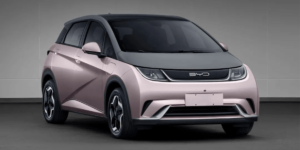 BYD has announced that the first model based on its new 800-volt architecture called “e-platform 3.0” will be an electric compact car unveiled in April under the working title EA1. As a production model, the electric car will be named Dolphin.

In April, BYD presented the EA1 and its new 800-volt platform in parallel. The latter is to be used in the Chinese group’s own electric cars in the future, but will also be offered to other carmakers in parallel. At the presentation during Auto Shanghai, BYD promised enormous driving performance and ranges with regard to the platform with talk of more than 1,000 kilometres and maximum acceleration from 0 to 100 km/h in just 2.9 seconds. In addition, the ‘e-platform 3.0’ is said to enable fast-charging at 800 volts.

Also on display at the Shanghai booth was the Dolphin (at the time still known as the EA1), a new compact electric car that for the first time bears the new BYD logo without the oval outline and anticipates the design language of future BYD electric cars. As Gasgoo reports, citing information from the Chinese Ministry of Industry and Information Technology, the Dolphin is just over four meters long, 1.77 meters wide and 1.57 meters high, with a wheelbase of 2.70 meters. The hatchback draws its power from an LFP battery (the energy content of which is not mentioned), the peak power of the permanent magnet synchronous motor is 70 kW, and the top speed is 150 km/h.

Gasgoo further writes that the Dolphin will be available in four variants in the future and will be sold via BYD’s e-network. It remains unclear when exactly the model will be launched on the market.

Electric sportscar with an 80s vibe from Germany