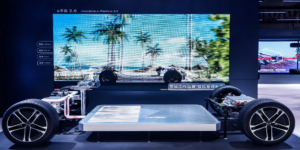 At the Shanghai Auto Show, BYD presented a new electric car platform that will also be offered to other carmakers. BYD’s ‘e-platform 3.0’ relies on the manufacturer’s Blade batteries and is supposed to enable enormous driving performance and ranges; there is talk of more than 1,000 kilometres.

As the Shenzhen-based company announced at the trade fair in Shanghai, the ‘e-platform 3.0’ is to form the basis of the “next generation of high-performance smart EVs” and is characterised by four advantages: Intelligence, efficiency, safety and aesthetics. In addition, costs are to be reduced as core components are further standardised and integrated into the platform.

According to BYD, numerous key modules have been newly developed for the drive system. These components are to be smaller, lighter, stronger and more efficient. For example, the 8-in-1 drive module should be able to achieve an efficiency of 89 per cent. According to BYD, an e-car based on this platform needs only 2.9 seconds to go from 0 to 100 km/h and can travel up to 1,000 kilometres on one battery charge.

The platform also allows fast charging with 800 volts, an exact charging power is not mentioned. It is said that 150 kilometres can be charged in five minutes. However, this figure should be treated with caution, as energy consumption and range in China are still specified in the NEDC. Therefore, the recharged range cannot be directly compared with the WLTP values in this country. The same applies to the 1,000 kilometre range, which should be a very good value even according to WLTP.


Overall, consumption is to be reduced by ten per cent, according to BYD. Since the ‘e-platform 3.0’ is equipped with a new heat pump technology ex-works, the range in winter should increase by ten per cent. However, BYD does not go into details about the new heat pump in the press release.

For the battery mounted between the axles, BYD relies on its “Blade Battery”, i.e. an LFP battery with large-volume cells, which was introduced in 2020. Since the blade battery has performed well in various crash and penetration tests, BYD promotes the technology as particularly safe compared to other lithium-ion batteries for electric vehicles. In the ‘e-platform 3.0’, the LFP battery, which is used for the first time with 800 volts system voltage, is said to be integrated into the structural design of the vehicle, which is why the torsional rigidity of the body is said to be twice as high.

With the long wheelbase and shorter overhangs of the EV-platform, BYD not only wants to enable larger batteries (the maximum capacity is not mentioned), but also a more spacious interior and better handling thanks to the low centre of gravity. Sedans based on the platform should be able to achieve a cW value of 0.21.

BYD does not specify when the first vehicles with the e-platform 3.0 will be launched on the market – the vehicles are to be presented “in the near future”. The platform is also to be offered to third-party customers in the near future. In the past, BYD has worked with Mercedes-Benz, Toyota and Didi Chuxing, among others, on the development of electric cars.

In addition to the new electric platform, BYD presented a new compact electric car, the EA1, at its stand in Shanghai. This vehicle also bears the new BYD logo for the first time, without the oval border. In addition, BYD showed the “X Dream”, a concept of a new premium SUV. Both models were designed under the direction of BYD’s global head of design Wolfgang Egger (ex-Audi). The new version of the Tang SUV with a plug-in hybrid drive also uses a ‘blade battery’ optimised for PHEV use.