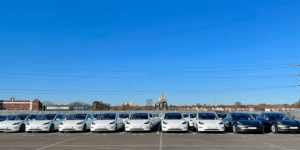 Tesla has to update the software in around 285,000 of its cars in China because a sudden acceleration to the preset speed could occur in connection with an accidental activation of the cruise control function.

The problem affects 211,256 Model 3s and 38,599 Model Ys produced in China, as well as 35,665 imported Model 3s. The Chinese regulators require Tesla to ‘recall’ the nearly 300,000 Made-in-China (MIC) and imported Model 3 and Model Y cars, although it’s expected that an over-the-air software update will solve the issue.