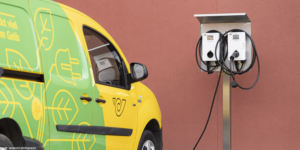 The industrial group ABB, together with EWW Anlagentechnik, has equipped the Austrian Post with around 2,000 AC wall boxes, which are to be installed at more than 100 locations. ABB, meanwhile, is apparently pushing ahead with preparations for the IPO of its business in charging technology for electric cars and electric buses.

The Austrian Post is reportedly aiming for zero-emission last-mile delivery by 2030 and plans to install over 2,400 AC and DC charging points at more than 130 locations to electrify its fleets. The Mobility House (TMH) is involved in the large-scale project as a technology partner. In a guest article, The Mobility House gave us an insight into the approach of the postal group and the importance of charging and energy management as a core element of the charging infrastructure.

The wallboxes are ABB’s Terra AC wall charging station, as also offered to private customers. According to ABB, the solution is characterised by “future-proof flexibility and high operational reliability”. The charging stations can be managed and operated via the “ChargerSync” portal.

“Fleet electrification has the biggest potential to impact transport emissions globally,” says Frank Mühlon, head of ABB’s E-mobility division. “We are delighted to be working with eww Anlagentechnik to enable a sustainable transport future for Österreichische Post and hope this serves to positively inspire other fleet providers to transition to electric vehicles.”

The e-mobility division led by Mühlon could go public next year. Reuters news agency, citing insiders, reported that the fast-growing division could be valued at around three billion US dollars (2.54 billion euros) in the process. ABB would not comment on the information.

ABB had previously announced plans for an IPO, but gave neither a timetable nor a valuation. ABB Group Chief Executive Bjorn Rosengren said in April that the group would likely retain a majority stake after an IPO, which would help the unit make acquisitions.

The e-mobility division had sales of $220 million, the equivalent of 186 million euros, in 2020. Over the past five years, the business has grown by an average of 50 per cent. The division has 850 employees.