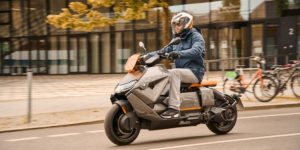 BMW has presented the series version of the CE 04 electric scooter. Many design elements of the futuristic Concept Definition CE 04 study have been retained. The electric scooter’s drive system is to benefit from developments in the BMW iX.

BMW presented the concept in November 2020, so now the series version is being presented. The visual changes are only minor: while the front still appears halfway familiar – as it also serves to protect the rider from wind and weather – the designers have given the CE 04 an elongated, flat rear. The flat rear with the floating bench seat is supposed to allow users to climb up from the rear, for example. Ease of towing and variable ergonomics for urban use were more important in the development than long-distance comfort.

While BMW was still reticent about technical data in November (as the focus at that time was on design), the values of the production vehicle are now available: The CE 04 has a maximum power of 31 kW (continuous power 15 kW), which should enable the “traffic light start” from 0 to 50 km/h in 2.6 seconds. BMW also offers a reduced-power version for the L3e-A1 vehicle class, which has a maximum output of 23 kW (continuous output 11 kW). BMW does not mention the acceleration here, but the top speed for both versions is supposed to be 120 km/h – making the CE 04 suitable for short stretches on the motorway and dual carriageways.

The electric motor is mounted in the frame between the battery and the rear wheel. It is a permanently excited motor which, according to BMW, is used in a similar form in plug-in hybrids such as the 225xe Active Tourer. For the CE 04, BMW Motorrad has developed its own and “very comfortable” version of recuperation for each driving mode “in extensive driving tests”. The driving modes Eco, Rain and Road are available ex-works, and a sport mode called Dynamic is also available at extra cost.

BMW has installed a cell with a capacity of 60.6 Ah and the battery has an energy content of 8.9 kWh. This should make a range of around 130 kilometres possible. BMW only specifies 100 kilometres for the A1 version, although the power is reduced here.

As standard, the battery can be charged with 2.3 kW – a cable for charging at the household socket is included, for charging at wallboxes or public AC charging stations a separate mode 3 cable is required. A fast charger with 6.9 kW is optionally available for 850 euros. A full charge should take 1:40 hours, a charge from 20 to 80 per cent around 45 minutes. The side storage compartment is optimised to accommodate the helmet, and the charging cable, for example, can be stowed in an optional pannier if the rider needs to carry the cable for a public charging session.

The CE 04 comes with a 10.25-inch TFT colour display. The integrated map navigation should also be able to be displayed on it, and the CE 04 also has connectivity functions. The smartphone can be charged via USB-C, and the mobile phone charging compartment is even actively ventilated, according to BMW.

According to the configurator, the CE 04 is available from 11,990 euros. There are three packages in total: Avantgarde for 220 euros, Comfort for 450 euros and Dynamic for 380 euros.

BMW boss Oliver Zipse sees the CE 04 as an “electric champion for the city” – and as a model for other city models from BMW Motorrad. “The BMW CE 04 is our new electric star for the city. It combines an e-drive with emotion and motorcycling fun. The latest technology, and the best battery cells, which also provide power in the BMW iX,” says Zipse. “Just like the CE 04, all future new BMW Motorrad models for urban mobility will be pure electric.” But Zipse’s statement raises the question: Why not all BMW Motorrad models?