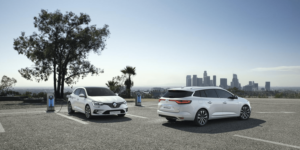 Renault expands the Megane electrified range available in the UK with the new Hatch Plug-In Hybrid version. The Megane Hatch PHEV will be available to order from August, with the first UK customers set to take delivery in September, while the ICE counterparts are to be scrapped from the lineup.

++ Kindly find updates to this article below. ++

The French automobile manufacturer first presented the hybrid Megane more than a year ago, with the performance provided by a 1.6-litre petrol engine, two electric motors and a multi-mode transmission. The original version’s system power stood at 118 kW. It featured an electric range in the WLTP cycle of 50 kilometres (in the city cycle of the WLTP, even 65 kilometres) with only 9.8 kWh.

For the updated Megane PHEV, customers will be able to choose from two trim levels – the ‘Iconic E-Tech Plug-In Hybrid 160 Auto’ and the sporty ‘R.S. Line E-Tech Plug-In Hybrid 160 Auto’. Both still feature a 1.6-litre petrol engine complemented by a 49kW electric motor, resulting in combined fuel economy of 235.4mpg (WLTP) and CO2 emissions of only 28g/km (WLTP). Efficiency isn’t to the detriment of performance either, as the 160hp drivetrain still enables a 0-62mph time of 9.4 seconds and a top speed of 114mph.

While Renault had not released prices and further specifications when announcing the Megane PHEV in the UK, the French manufacturer now delivers on the details.

British buyers may get the plug-in hybrid on the road for £29,495. Renault UK also points to the Benefit-In-Kind or BiK rate of 11 per cent and £0 VED for the first year.

The Renault Megane in Hatch PHEV version can run 30 miles on electric power. The company says its 9.8 kWh traction lithium-ion battery can be charged from zero to 100 per cent in three hours using a Type 2 charger or 4 hours and 15 minutes via a domestic three-pin plug socket.

As before, the new Megane Hatch Plug-In Hybrid is available to order in August, with the first UK customers set to take delivery in September.