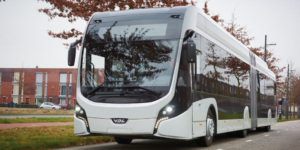 At the end of 2018, GVB signed a contract with VDL Bus & Coach for the delivery of said 31 electric buses with the option of 69 more. In November 2020, the transport company announced that it was preparing the tender for another 91 to 142 electric buses and chargers, including standard and articulated buses that have both fast charging technology (‘opportunity charging’) and the requirements for depot charging.

The 44 electric articulated buses ordered from VDL are now part of this further procurement round. The manufacturer will also take care of the implementation of the charging infrastructure for these examples. The Dutch bus company says that fast charging is possible at Amsterdam Central Station, and the vehicles can also be charged at Garage West or Garage Noord. The 44 articulated buses have a battery system with a total capacity of 422 kWh on board. As additional special features of the Citea SLFA-180s destined for Amsterdam, the zero-emission buses feature camera mirrors and an electric wheelchair ramp, among other features.

Meanwhile, the 31 VDL electric buses already in operation in Amsterdam are in service on lines 15, 22 and 36, all of which start and end at the Sloterdijk stop. This includes nine Citea SLF-120 Electric and 22 articulated Citea SLFA-180 Electric buses, all also equipped with pantographs.

By 2025, Amsterdam’s public transport authority plans to convert its entire bus fleet to electric vehicles. The ambitious electrification plans is driven by the Dutch capital’s Clean Air Action Plan, which envisages the banning of internal combustion vehicles from 2030 and, among other things, will only allow zero-emission public transport in an environmental zone within the A10 ring road from as early as 2025.

“Despite coronavirus and all the uncertainties that come with it as a city transport company, we believe it is extremely important that the process of making our bus fleet more sustainable goes ahead,” says Claudia Zuiderwijk, managing director of the GVB. “We consider it our duty as Amsterdam’s public transport operator to make a maximum contribution to the city’s sustainability goals. Amsterdam is growing, and as a public transport company we want to keep the city accessible for everyone in a high-quality manner. Electrifying our buses, thus contributing to clean air, is an important part of that.”