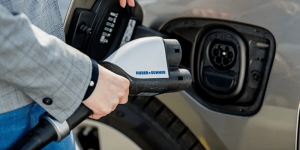 According to a media report, the EU Commission is planning to give the member states concrete requirements for the expansion of the charging infrastructure as part of the eagerly awaited “Fit for 55” climate package. The package is to be published on 14 July.

According to information from the “F.A.Z.”, the Commission wants to oblige the states to guarantee at least one high-performance charging station at intervals of no more than 60 kilometres along the most important European motorways by the end of 2025. Five years later, this will also apply to the EU’s extended motorway network. In Germany, this also includes important federal roads.

According to the newspaper, a draft of the new version of the regulation on the infrastructure for alternative fuels is available. However, the draft does not mention any concrete figures. For the 60 kilometres, only “according to information from the F.A.Z.” is given as the source.

For heavy transport, the member states are also to ensure that there is a hydrogen filling station every 150 kilometres. The draft regulation on the infrastructure for alternative fuels also contains precise specifications on how powerful the charging stations must be in the years 2025, 2030 and 2035.

The member states are also to ensure that the operation is user-friendly, the prices are transparent and smooth payment is possible.

According to the report, the EU commissioners’ declared goal is that the charging infrastructure must be in place before CO2 emissions from new cars fall to zero – hence the staggered targets. The problem: Even within the Commission, according to the information of the German newspaper F.A.Z., there is still no agreement on when the CO2 emissions of new cars should drop to zero – which would be equivalent to a ban on combustion cars. “Climate Commissioner Frans Timmermans wants the end to be in 2035,” writes the newspaper. “Internal Market Commissioner Thierry Breton wants to accept 2040 at the earliest, Brussels says.”

The official formulation of reducing CO2 emissions from new cars to zero is intended to emphasise technological neutrality. However, with the targets for fast-charging stations for cars and hydrogen filling stations for heavy transport, the Commission is setting a strong direction.

However, drafts can still change considerably in the political process, and even within the Commission there does not seem to be complete agreement on the scope and pace – as statements from the industry have recently indicated. In the case of the important “Fit for 55” climate package, negotiations are likely to go on until the last minute.