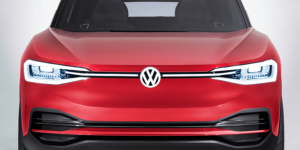 VW has mentioned an ID.8 for the first time. In a speech manuscript on the new Group strategy published by Herbert Diess on LinkedIn, the model designation ID.8 for a large electric SUV in the format of the VW Atlas offered in North America is mentioned on page 10.

Diess mentioned the ID.8 in a list according to which “all relevant global vehicle segments” would already be covered today with “special EV offerings.” In addition to the ID.3 as the Golf-class counterpart and the ID.4 and ID.5 as counterparts to the VW Tiguan, the manuscript clearly mentions “Atlas: ID.8” – accompanied by the footnote that the vehicle is not yet on sale.

But in his presentation, Diess did not mention this information from the manuscript. It is still unclear why the VW boss omitted this paragraph from the strategy presentation but nevertheless distributed the manuscript via LinkedIn.

The Atlas is a 5.05-meter SUV that VW builds at its U.S. Chattanooga plant in Tennessee. The vehicle is significantly larger than the Tiguan, and is on a par with the Touareg luxury SUV in terms of dimensions – but at the same time is significantly less expensive than that model. The Atlas is based on the MQB and is sold in Russia, the Middle East and China as the VW Teramont.

It is also interesting that the VW ID.6 is classified in the Passat class in the manuscript. In fact, VW so far only sells the ID.6 Crozz and ID.6 X in China, but these are SUV models. The two MEB-based vehicles are around 4.89 meters long and clearly tower over the current Passat B8 (4.78 meters).

Since it is not yet known whether the ID.6 SUVs will be sold outside China, it also seems possible that the electric counterparts to the Passat series, previously announced as the Aero A and Aero B, will be given the ID.6 model designation in Europe. The Aero A and Aero B are MEB studies in the form of a midsize sedan and a corresponding station wagon.

Elsewhere in his manuscript, Diess suggests that the size of vehicles may no longer be a gauge of their environmental friendliness – and thus their potential market opportunities in some countries. “Cars are becoming emission-free,” Diess said. “Even large SUVs will be environmentally friendly and sustainable. Cars are losing almost all of their negative attributes.”