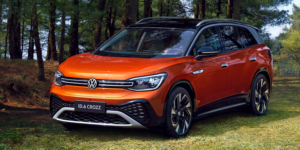 At the Auto Shanghai, VW has presented the ID.6, the third model in the ID. family for the Chinese market. Like the ID.4, the all-electric MEB-based family SUV with room for up to seven passengers is available in two versions.

The ID.6 Crozz from the FAW Volkswagen joint venture will roll off the production line in northern China and the ID.6 X from SAIC Volkswagen in the south of the country. At the start, three power levels with 132, 150 and 225 kW and two battery sizes with a usable energy content of 58 and 77 kWh respectively will be offered.

The 225 kW version is the all-wheel-drive version, titled ‘4MOTION’. Recently, with the Audi Q4 50 e-tron quattro, an MEB all-wheel-drive car was also presented for Europe. However, Audi only specifies output of 220 kW. In the coming week on 28 April, VW will also present an electric VW all-wheeler for Europe with the ID.4 GTX.

Volkswagen does not specify the range in WLTP, but in the China NEDC, which is relevant for the sales market. The 58 kWh model has a range of up to 436 kilometres, with the large battery (and presumably the 150 kW rear-wheel drive) it is up to 588 kilometres. A range for the all-wheel-drive version is not explicitly mentioned. However, the China NEDC ensures very high standard ranges, the deviation from everyday values is higher here than with the WLTP.

Like the ID.4 X and ID.4 Crozz, the two ID.6 offshoots also differ in some design features. These are not only small changes to the light graphics, the headlights also result in changes to the sheet metal. The differences are greater at the rear: While the ID.6 Crozz carries the number plate on the boot lid, the ID.6 X has it mounted at the bottom of the bumper – taillights, boot lid, bumper and the indicated underride protection have been adapted in each case.

The ID.6, shown in Shanghai in both versions, is the first model in the ID. family to be developed specifically for one market, according to VW. “The ID.6 is a continuation of Volkswagen’s regionalisation strategy and is another important step towards becoming the most sought-after brand for sustainable mobility in China,” the Wolfsburg-based company wrote. However, VW does not mention the ID.5, which will only be sold in Europe, as Europe only counts as a sales region, not as a market.

In concrete terms, VW claims to have tailored the concept of the 4.88-metre SUV “is tailored specifically to the needs and wishes of Chinese customers in terms of space, functionality, design and, in particular, user experience”. The additional 30 centimetres compared to the ID.4 allow, among other things, a third row of seats. The second row of seats can also be adjusted longitudinally. A panoramic glass roof is available ex-works, and a panoramic sunroof is optional.

The interior also features the familiar control system with 12-inch touchscreen and the ‘ID. Light’. There are also several assistance systems and also the optional augmented reality head-up display.

“With the new ID.6, we are laying the foundations for at least 50 per cent of our cars sold in China being electric by 2030,” says Ralf Brandstätter, CEO of the Volkswagen brand. “We are maintaining momentum and gradually increasing our range of MEB cars: By 2023, Volkswagen will have a total of eight ID. models in China, making MEB nationwide there. The economies of scale that we have achieved allow us to offer the latest technology at an affordable price – and thus further expand our electric offensive.”

Volkswagen has not yet revealed prices for the ID.6.

Audi gives preview of electric A6 for 2023 in Shanghai