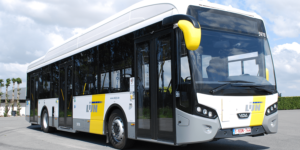 Flemish public transport operator De Lijn procures 44 new articulated buses with plug-in hybrid drives to green its operations. In addition, the operator will also convert 280 existing hybrid buses to plug-in hybrids to increase their electric range, out of a total fleet of 530.

In future, De Lijn will have 150 PHEV buses with a 15 km electric range, 90 PHEV buses capable of running 30 km electric, and 84 PHEV articulated buses with a 100 km range on battery power. Charging will happen at their depots, mostly overnight and De Lijn says it “strictly purchases green electricity only”.

De Lijn has been exclusively procuring buses with alternative drives since 2019, i.e. primarily hybrid buses. However, De Lijn is not only focusing on hybrid technology but recently announced a framework tender for 350 purely electric buses and the corresponding charging infrastructure. The operator was “determined to make its entire fleet emission-free by 2035,” said Ann Schoubs, De Lijn’s General Manager at the time.

Lydia Peeters, Flemish minister of Mobility and Public Works, echoed this aim when announcing today’s deal for the new plug-in hybrid buses. “By deploying these buses, De Lijn comes even closer to zero-emission in urban areas, with the final goal of emission-free service in the whole of Flanders,” she said. Ever since the new Flemish government took office in 2019, Peeters has been working hard towards a zero-emission fleet for De Lijn. She even allocated €93 million of her EU COVID recovery budget towards a greener fleet, mainly for electric buses and their charging infrastructure.

Still, the company is behind an initial goal envisaged in the Flemish coalition agreement of using only zero-emission buses in the cities as early as 2025. Said target was abandoned, and Schoubs had told the mobility committee of the Flemish parliament in March that it was “unrealistic”. In today’s announcement, she also pointed to the market as unable to supply bendy buses that meet De Lijn’s requirements. “As articulated buses represent a significant part of our fleet, De Lijn is keen to introduce a greener solution for this bus type in order to improve air quality soonest,” the GM said.

At the same time, in January 2019, De Lijn said they were going to procure up to 970 e-buses in the short term.

Arrival scores first e-bus deal in the US worth $2Mn