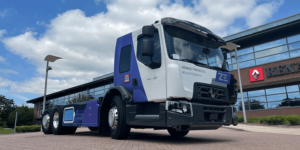 Renault Trucks is launching another electric truck variant as the manufacturer starts marketing the D Wide Z.E. Low Entry Cab, developed for waste transport. The electric refuse truck is equipped with a special, lowered cab and can be ordered throughout Europe with immediate effect.

The new truck variant is an offshoot of the D Wide Z.E., which went into series production last year. The D Wide Z.E. LEC (LEC stands for Low Entry Cab) was developed in collaboration with bodybuilder Estepe and offered by Renault Trucks in the 6×2 version with steered rear axle. The technical specifications do not differ from the original model. Details below.

According to the French company, the D Wide Z.E. LEC was specifically designed to “facilitate waste transport and improve the safety of employees and road users”. The low entry height of 20 centimetres into the cab and the door opening up to 90 degrees makes working with the vehicle effortless and safe. “This significantly reduces crew fatigue from getting in and out of the cab more than 100 times per round,” Renault Trucks advertises. Moreover, despite the low position of the cab, the truck is said to ensure an “excellent, direct overview” of the road.

The cab can accommodate up to three people in addition to the driver. Optionally, additional side windows can be fitted in the rear of the cab. Also available on request is a “flat floor” which, according to the manufacturer, allows freedom of movement inside the vehicle and allows entry and exit on both the left and right.

The D Wide Z.E. is basically a 26-tonne electric truck optimised by Renault Trucks specifically for waste transport. According to Renault, waste disposal is an area of application for which electrification is particularly well suited. In everyday life, waste disposal vehicles start up and slow down very often (300 to 800 times per operation). This leads to high consumption and increased particulate matter and particle emissions due to rapid material wear. In electric vehicles, which mainly use the engine for braking, the braking system is less stressed, and thus there are lower emissions than the combustion engine.

We have already discussed the technical details of the three-axle vehicle with a wheelbase of 3.9 metres in earlier reports. The D Wide Z.E. has two e-motors with 260 kW continuous and 370 kW peak power and 850 Nm torque and a battery pack with 200 kWh capacity. The power transmission is controlled by a 2-speed gearbox. The vehicle is charged with up to 20 kW AC and 150 kW DC.

However, a few months ago, Renault Trucks announced new battery options for the D Wide Z.E. (as well as for the 16-tonne D Z.E.). The trucks previously equipped with 50 kWh modules can now be ordered with 66 kWh modules. For the D Wide Z.E., up to four modules of 66 kWh are possible, giving a range of up to 180 kilometres. Here Renault has apparently corrected its specifications somewhat downwards: Previously, with the maximum 200 kWh, there was talk of up to 200 kilometres of realistic range; with the now up to 264 kWh, it is only said to be 180 kilometres.

CA: Electric truck project launches at the Port of Oakland