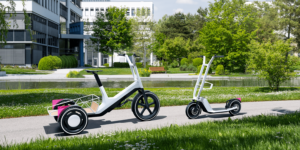 The BMW Group research department has presented concepts for an electric cargo bike and an electric trek scooter. The Munich-based company does not intend to produce the two vehicles itself, but there are apparently talks with potential licensees.

BMW has repeatedly designed its own bikes and two-wheelers in the past – including the X2City e-Scooter, which was presented in 2019. This was intended to score points over other electric kick scooters with increased comfort and relatively large wheels, and also featured unique pedal control of the motor instead of handlebar control.

Under the name ‘Clever Commute’, BMW has now presented the concept of an electric scooter that can be folded comfortably for taking along on public transport and/or in a car without compromising on driving stability. The vehicle is thus intended to convince private customers, not sharing providers.

In total, there are three different modes: In public transport mode, the running board is folded up to the side and the wheelbase is shortened. This is intended to reduce the space required on buses and trains and at bus stops. When fully folded, the ‘Clever Commute’ is supposed to have a particularly compact pack size so that it will also fit into smaller car boots, for example crosswise into the boot of a Mini and lengthwise into that of a BMW 3 Series. The driving mode is supposed to increase stability with its long wheelbase.

The three-wheeled ‘Dynamic Cargo’ cargo bike is much more unconventional than the folding electric kick scooter. The centrepiece here is a variable-use loading area placed between the two rear wheels, which can be equipped with attachments for transporting cargo and/or children as well as for leisure activities.

In principle, this sounds like the concept of well-known electric cargo bikes, but according to BMW, these are often too wide and too long or have worse handling characteristics than normal bikes due to the extra weight.

“Our goal was to develop a concept that retains the agility and driving feel of a normal bicycle while adding innovative, safe transport options” says Jochen Karg, Head of Vehicle Concepts in the BMW Group’s New Technologies and China division. “The “Concept DYNAMIC CARGO” is the first dynamic ‘pick-up’ cargo bike that combines driving pleasure with flexible use and increased year-round suitability.”

BMW aims to achieve dynamism in the three-wheeled concept by allowing the front main frame to tilt when cornering, unlike other three-wheeled cargo bikes. However, the rear frame, which is connected by a swivel axle, is supposed to remain stable on the road. The electric drivetrain is installed in the two rear wheels. BMW also wants to develop a modular weather protection system.

The BMW Group will not produce either concept itself, but is in talks with possible licensees. Possible prices for the two vehicles have not yet been named by the Munich-based company, probably also for this reason.