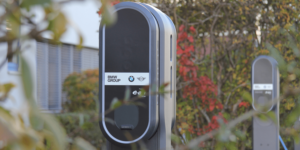 The BMW Group has already exceeded its 2019 target of installing around 4,100 charging points at its German locations by the end of 2021. Together with its partner Eon, around 4,350 charging points have been installed to date.

BMW expects this number to rise to around 5,000 by the end of 2021, of which more than 1,000 will be eRoaming-capable. The target goes back to 2019 when BMW and Eon announced plans to install more than 4,100 charging points for electric cars in Germany by 2021. Primarily intended for employees, around half of the charging points are also accessible to the public.

In today’s update, the company increased said goal and detailed the progress this far. The majority of the charging points erected consist of AC wall boxes delivering up to 11kW. In addition, more than 60 DC fast-charging stations with a capacity of 50kW are also part of the network. Electricity comes solely from renewable energy sources.

BMW added that it was planning to drive international expansion as well but has yet to specify which countries this may affect.

The move comes amid a drive for more electric models. BMW will launch the BMW i4 and the BMW iX this year which BMW says represent “the next substantial step” in the Group’s transformation towards a global sales share of 50% of all-electric vehicles in 2030.

Those driving a BMW electric car also have access to BMW Charging or Mini Charging service. The Group claims it includes more than 11,000 charging points from different operators across the UK, as well as 173,000 charge points across Europe.