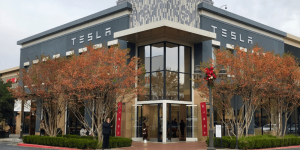 Tesla is planning a realignment of its distribution strategy, according to a report. The electric car manufacturer allegedly wants to get rid of showrooms in prestigious urban locations and instead focus on cheaper locations and delivery centres.

At least, that is what the usually well-informed Tesla portal Electrek reports with reference to insiders. Direct sales are not to be changed, and Tesla apparently wants to continue to operate all locations itself and not cooperate with other dealers.

As Electrek writes, Tesla wanted to give up “showrooms in fancy shopping malls” and instead focus on cheaper locations, remote management of the test drive fleet and delivery centres. Despite the closure of some locations, the retail workforce is not to be reduced. Rather, Tesla is currently looking for sales staff.

Instead of personally in the city centre store (for which high rents are incurred), the sales staff are to advise prospective customers digitally and accompany them when ordering online. Currently, when a customer orders a Tesla online, they are assigned a ‘Tesla advisor’ from a nearby store. According to the report’s sources, Tesla has now come to the conclusion that these employees do not necessarily have to work in a store, but can also work virtually.

Tesla is said to be trying to keep its own parking spaces near the stores (for example in American shopping malls), but to give up the shop space. This would allow Tesla to continue offering test drives from the location. The virtual advisor is supposed to direct prospective customers to the car park and can unlock and start the cars remotely. The money that Tesla saves with the high rents is to be invested in the expansion of the service centre network.

It would not be the first realignment of the sales concept at Tesla: in 2018, the company announced that it would focus its stores on highly frequented locations in attractive city centre locations or high-quality shopping centres. A year later, Tesla wanted to close all retail locations and lay off the employees – with the reasoning that the vehicles would mostly be ordered online anyway. A few weeks later, however, Tesla announced that most of the stores would remain open after all.