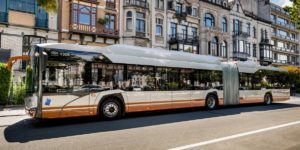 Specifically, AarBus ordered six Solaris Urbino 12 electric solo buses and 23 Solaris Urbino 18 articulated e-buses. Aarhus is the first city in Denmark to have opted for e-buses from the Polish bus maker that has been working with the municipality for some time.

The now commissioned Urbino electric buses will be fitted with Solaris so-called High Energy batteries. Batteries with a total capacity of 440 kWh will be installed in the articulated vehicles, whereas in the shorter buses, batteries will store about 260 kWh of energy. As usual with Solaris, the e-buses can recharge in provides the drive, and in the articulated buses, an electric axle with two integrated electric motors will do the same.

The Solaris buses will join a growing fleet of electric buses in Aarhus. This June, AarBus ordered 29 Volvo 7900 Electric Articulated buses which also complement four existing electric buses that have been operating in Aarhus since 2019.

The electric bus orders come at a time when six of Denmark’s largest cities have just committed to only purchase zero-emission buses starting this year.