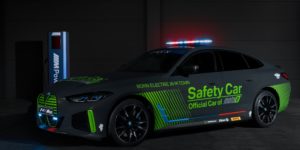 “With the BMW i4 M50, we are entering a new era and presenting our first M with a fully-electric drive train,” says Markus Flasch, Managing Director of BMW M GmbH. “With the first M BEV, we are setting course for a future, in which the combination of extremely sporty, performance vehicles and electrification is an exciting theme.”

Incidentally, the BMW i8 has also been replaced by an electric car for Formula E this season. In this case, however, the BMW Group opted for a tuned Mini Cooper SE. While the Mini Safety Car has been technically adapted, BMW does not mention any technical changes in the announcement for the i4 M50 Safety Car – but does mention that the Safety Car is based on the i4 M50. So changes are possible, albeit more in terms of weight – components such as the rear seat are not needed here. The output of the series model is already 400 kW.