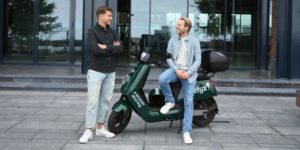 The Dutch micromobility company Felyx is expanding in Europe. In Germany, the company is spreading out to Berlin and increasing its existing fleets in Düsseldorf and Hamburg. Felyx is now putting another 1,500 electric moped scooters on German streets.

Felyx’s electric mopeds can be found, reserved, and activated via an app without a starting fee. In Berlin and Düsseldorf, a minute’s ride costs 27 cents and for parking, Felyx takes 13 cents per minute. In Hamburg, customers pay 29 cents per minute of travel and also 13 cents for parking. Customers can pay via Paypal, for example, and Felyx is giving first-time users free minutes. The Felyx electric mopeds are from Niu.

With the launch in the German capital, the first phase of expansion in Germany is now complete, says co-founder Maarten Poot, according to a report by MT/Sprout. With this move, the company has doubled its fleet to a total of 6,000 moped electric mopeds. Prior to Berlin in July, Felyx launched its light electric vehicles in Düsseldorf and shortly after in Hamburg. The company launched in Amsterdam in 2017 and initially expanded its service to The Hague, Rotterdam, Groningen, Delft, EIndhoven, Haarlem. Shortly after the company opened services in Den Bosch and Brussels in Belgium, before entering Germany.

In February this year, Felyx managed to raise 24 million euros in a Series A funding round. The company says it is utilising the money as growth capital and further its expansion in Europe. The company also plans to launch in France and further expand its business in the Benelux countries. The equity financing was led by De Hoge Dennen Capital, the investment vehicle of the De Rijcke family, and current majority shareholder and entrepreneur Anne-Marie Rakhorst.