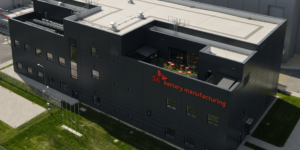 SK Innovation has decided to spin off its battery business. The new company, provisionally named SK Battery, is to be founded on 1 October. In the second quarter, however, the division was still in the red.

With the spin-off, the South Korean Group wants to enable the battery division to better focus on the fast-growing market for electric cars and their batteries – independently of the other business lines of the listed company.

As SK Innovation announced on Wednesday in the course of the presentation of the business figures for the second quarter, the board had decided on the plan on Tuesday. The plan not only provides for the spin-off of the battery division, but also for a new holding structure: SK Innovation wants to become a holding company, the E&P division (oil production and exploration) is also to be spun off – other divisions, such as lubricants, are to remain with the holding company for the time being. Before the new company, SK Battery, can be founded, it still has to be approved by the Annual General Meeting on 16 September.

“We made this decision to establish a management system specialized for each business, strengthening its original competitiveness,” said Kim Jong-hoon, CEO of SK Innovation. “We will make each entity more flexible to cope with management environments more quickly by attracting investment and improving corporate value.”

The plans were not well received on the stock market, with shares initially falling by around five per cent – as batteries are now the company’s core business, investors fear that the spin-off could negatively affect the company’s overall value in the long term.

SK Innovation is currently the sixth-largest battery cell manufacturer and currently has around 40 GWh of production capacity with plants in South Korea, China, the US and Hungary. By 2023, capacity is expected to increase to 85 GWh, and by 2025 to 200 GWh. By 2030, SK Innovation wants to be able to produce 500 GWh.

As mentioned, SK Innovation also presented its business figures for the second quarter. The battery division reported sales of 630.2 billion won (+86 per cent compared to Q2 2020) and a loss of 97.9 billion won. Converted, this corresponds to 464 million euros in sales and a loss of 72 million euros.

SK Innovation is not alone in spinning off its battery business: South Korean competitor LG Chem only spun off its battery division in December 2020. Since then, it has been operating under the name LG Energy Solution.