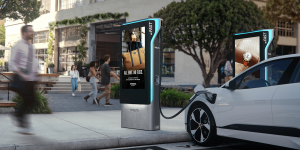 US start-up Volta Charging is coming to Europe, starting with an office in Germany. The company offers initially free DC charging refinanced through advertising. Volta has yet to disclose its timeline for entering the EU market.

However, it has made a definitive agreement for a business combination with Tortoise Acquisition Corp II to expand operations into the European Union with the opening of an office in Germany. Again it remains to be seen where the office will be.

The companies are already connected as Tortoise will help Volta Charging to a public listing through a SPAC deal set to go through this August. Volta will then list as VLTA in New York. The pro forma enterprise value of the merged company is estimated at $1.4 billion (approximately 1.2 billion euros), and the IPO is expected to raise approximately $600 million (510 million euros) in net proceeds for Volta.

For the planned expansion to the EU, Scott Mercer, Founder and CEO of Volta Charging, said, “the time is right to introduce our model in the EU”. He also pointed to “American business partners who have already chosen to install Volta Charging stations on-site report increases in spend, dwell time and engagement on site.”

The company’s model includes large screens that cover the charging stations and display additional advertising. When coming to market, Volta offered free charging for 30 minutes before asking customers to opt to pay a fee to continue the session.

Today’s announcement does not say whether that ad-financed model is still alive or will be used at launch in Europe. Volta Charging mentions “media-enabled charging stations”, which offer brands a “dynamic content experience platform”.

In more concrete terms, Volta Charging claims it now has more than 1,700 chargers in 24 US states. When launching in 2019, Volta aimed for 150 ad-financed DC charging stations, so we expect not all of these run free charging paid for by advertisers.

The announced expansion of the US charging infrastructure provider Volta Charging into the EU is taking shape. The company has just announced that its initial focus will be on Germany, Austria, Switzerland and France. Volta’s expansion in Europe will be implemented by local teams made up of electric vehicle charging hardware and software engineers, SaaS experts and digital outdoor sales managers. They will operate from offices in Berlin and Paris.