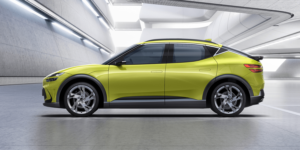 Hyundai’s luxury brand Genesis has released first photos of the exterior and interior design of the GV60. The Genesis GV60 is the brand’s second electric model after the Electrified G80 and the first based on the group’s E-GMP platform.

Hyundai Motor Group does not yet disclose technical data on the GV60 in the announcement. What is clear, however, is that the GV60 will use the 800-volt technology of Hyundai’s own E-GMP electric platform. Depending on the battery size, DC charging power of up to 240 kW is possible, and the charging process from ten to 80 per cent takes 18 minutes – at least for the Hyundai Ioniq 5 and Kia EV6, which have been presented on the platform so far. The batteries of these models are up to 72.6 kWh and 77.4 kWh in the case of the Kia.

Nothing is yet known about the battery and drive portfolio of the GV60. It is therefore unclear whether the Hyundai Motor Group will also use the 58 kWh battery in the entry-level model of the premium brand Genesis. It is also unclear whether the GV60 will also be available with rear-wheel drive or only as a four-wheel-drive with two electric motors – and whether there will also be a sporty offshoot in the power range of the Kia EV6 GT (430 kW).

The design of the GV60 picks up some elements of the Genesis brand design, but also of its E-GMP siblings. The two-part headlights and tail lights are typical of the Genesis vehicles. The aerodynamically recessed door handles are also used by the Ioniq 5 and EV6, and the side view with the sloping rear window and the rising shoulder line is probably inspired by the latter. However, the design of the rims is unique.

And the positioning of the charging port is also different from that of the Ioniq 5 and EV6: while the latter have placed the charging socket far in the right rear corner directly at the rear light, the pictures of the GV60 published so far show the charging port above the rear wheel on the passenger side – i.e. roughly in the place of a classic fuel filler neck.

In the interior, the GV60 also adopts the basic layout of the two previously known E-GMP electric cars: the steering wheel has only two spokes, and there are also two large screens that are connected in a single unit. Below the right-hand screen for infotainment is a bar with control buttons for climate control and some basic infotainment functions. When it comes to the centre console, Genesis seems to have opted for more of a Kia approach, with the centre console separating the driver and passenger areas more clearly than the open layout in the Ioniq 5.

However, there are also serious differences – this does not mean the rounded to oval layout of many design elements. Monitors for the camera exterior mirrors are placed in the window triangle on the doors. These appear somewhat higher and larger than in the Audi e-tron quattro, comparable in format with the Honda e. Unlike in the Honda, however, the camera monitors are not positioned on the dashboard.

It is not yet known when the GV60 will be launched and at what price. However, it will also be available in Europe: In May, Genesis had announced that, in addition to the Electrified G80 sedan, it would bring two more electric cars to Europe – one of them on a pure EV platform. This is therefore likely to be the GV60 e-GMP Stromer now on display. Details about the third BEV on a mixed platform have not yet been revealed.

According to Green Car Reports, the Genesis GV60 will also be the first e-GMP model to get an inductive charging function. Genesis has apparently confirmed that this function will be available in vehicles for the South Korean market. The hardware will be supplied by WiTriCity.

Whether and when Genesis will also offer the inductive charging function in North America or Europe has not yet been revealed. The deployment in South Korea is a pilot programme.

Green Car Reports has not said what charging power that will be possible with the wireless system. So far, there is no further information on how the pilot project in South Korea will be structured in terms of infrastructure.