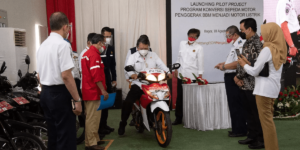 Indonesia has launched a pilot project to convert motorbikes with combustion engines to electric drives. Ten motorbikes have been converted so far, and 90 more are to follow by November.

With the pilot project, the government wants to build a market for such conversions. “To create economies of scale, we have to create a market,” said Energy Minister Arifin Tasrif at the launch of the project. Conversion technology needs to be developed at the small and medium enterprise level, he said.

Indonesia is one of the largest markets for motorised two-wheelers in the world. In 2019, there were about 15 million cars on the road – and 112 million motorbikes, according to the Indonesian Automobile Association. Predominantly, these are powered by internal combustion engines.

A representative of the Ministry of Transport reportedly stated at the same event that a programme is also planned to convert internal combustion buses to electric drives. However, details on this are not yet known.

The Indonesian government has set a target of having a total of 13 million electric motorbikes (including converted ones) and 2.2 million electric cars on the roads by 2030, according to a Reuters report. By 2050, the sale of internal combustion engine vehicles is to be banned. The country is the largest economy in Southeast Asia and one of the largest greenhouse gas emitters in the world.

Indonesia not only wants to convert the vehicles in the country, but also to build up an industry around electric mobility – several projects for battery factories are currently underway, for example by Hyundai and LGES or by CATL. Indonesia is one of the most important nickel producers (about a quarter of the global deposits are located there) and wants to build up a processing industry based on this – with batteries and electric cars. For this purpose, the government founded the joint venture Indonesia Battery Holding with several state-owned companies.