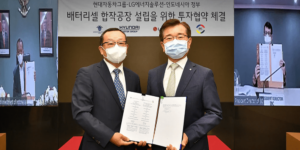 Hyundai Motor and LG Energy Solution have reached an agreement with the government of Indonesia to build a battery cell factory in Karawang near the capital Jakarta. The factory is scheduled to start production in the first half of 2024 with an annual capacity of 10 GWh.

According to the announcement by the South Korean car company NCMA, battery cells for models of the E-GMP platform from Hyundai and Kia will be produced there. The factory is to produce battery cells for more than 150,000 vehicles per year. Construction of the buildings is scheduled to begin this year and be completed in the first half of 2023. Series production is then to start in the first half of 2024.

With the batteries from the new cell factory, Hyundai also aims to increase the efficiency, performance and safety of its electric vehicles, as the battery cells will be optimised for Hyundai and Kia models. In addition, the plant will help “secure a stable supply of EV batteries at a competitive price for upcoming BEVs”.

Officially, only a memorandum of understanding has been signed between the two Korean companies and the Indonesian government, but the plans are already more concrete: Hyundai Motor Group and LG Energy Solution want to invest 1.1 billion US dollars (about 930 million euros) in the plant. The two partners each want to hold 50 per cent of the shares in the joint venture, which is yet to be founded and will operate the plant.

“The Indonesian government agrees to offer various incentives and rewards to support the stable operation of the plant,” Hyundai’s statement says. However, the subsidies are not described in more detail or even quantified.

Karawang is located near what is now Indonesia’s capital, Jakarta. “Thanks to Karawang’s well-established transportation networks, including airports, ports, and highways, the city has attracted development of several large-scale industrial complexes across several industries, such as automotive, electronics, logistics, construction materials and others,” Hyundai states about the chosen location.

The fact that a battery cell factory will be built in Indonesia – also with the participation of LGES – had become apparent. Indonesia is one of the most important nickel producers (about a quarter of the global deposits are located there) and wants to build up a processing industry based on this – with batteries and electric cars. In recent years, international manufacturers have repeatedly been lured to this end; in 2019, there were corresponding commitments from Toyota and Hyundai – but each for vehicle plants.

This May, it was reported that LG Energy Solution would build a $1.2 billion battery factory in the Indonesian city of Bekasi, east of Jakarta, citing information from Indonesia’s investment minister. The initial capacity was also mentioned as 10 GWh, but the partner was the state-owned Indonesia Battery Corporation (IBC). Since LG and Indonesia have signed a major investment agreement worth the equivalent of eight billion euros, this factory could be built in addition to the joint venture between LGES and Hyundai.

At the signing of the Memorandum of Understanding at LGES headquarters, LGES CEO Jong Hyun Kim was joined by Sung Hwan Cho, President and CEO of Hyundai Mobis – the Indonesian representatives were virtually connected. No quotes from the managers are included in the announcement.

The relationship between the two Korean groups had suffered somewhat recently. For a long time, the two partners blamed each other for the recall of the Hyundai Kona Electric due to possible battery fires. In the end, LGES took over the majority of the costs for the worldwide recall.

Hyundai Motor Group and LG Energy Solution have now laid the foundation stone for their battery cell factory in Indonesia, announced at the end of July. The plant in Karawang near the capital Jakarta is scheduled to start production in the first half of 2024 with an annual capacity of 10 GWh. Hyundai provides few further details about the plant beyond the known information from July in the announcement. For instance, it confirms that the plant could be expanded up to 30 GWh depending on demand.

“Hyundai Motor Group is focusing its capabilities on becoming a global leader in the EV market, which is the key to securing future competitiveness. The plant is a part of these efforts,” said Euisun Chung, chairman of Hyundai Motor Group, at the digitally held groundbreaking ceremony. “Starting with this plant, an EV ecosystem will be successfully established in Indonesia with the development of various related industries. Furthermore, we expect Indonesia to play a key role in the ASEAN EV market.”