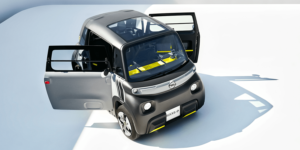 Opel is introducing its own offshoot of the Citroën Ami light electric vehicle. The mini and low-cost EV will come to market as Opel Rocks-e in Germany with orders starting this autumn online or through direct sales at select Opel dealers – with other markets to follow in 2022.

The Opel Rocks-e and the Citroën Ami are basically identical vehicles. The dimensions and technical data are the same. The design is similar except for a few details. The positioning of the mini-vehicle as a city electric vehicle for purely urban use is also similar. Like its French sister brand, Opel wants the Rocks-e to appeal primarily to young people aged 15 and over. This is because the light vehicle can already be driven with an AM driving licence (keyword: scooter driving licence).

The decisive factor is that the Rocks-e has no more than 6 kW of power, no more than two seats and does not travel at more than 45 km/h. This means that, throughout Germany, 15-year-olds are already able to drive the Rocks-e. Moreover, 15-year-olds are already allowed to get behind the wheel in Germany due to an amendment to the law that came into force this year. Young people used to have to be at least 16 years old in certain federal states.

But back to the 2.41-metre short and 471-kilogram city runabout. The spartan mobile consists of about 250 individual parts and is supposed to have a range of up to 75 kilometres with a 5.5 kWh battery. The 48-volt drive produces 6 kW on the front axle. The maximum speed is 45 km/h – it is not possible to drive on motorways. For more technical details, we recommend our driving report on the Citroen Ami.

According to Opel, the battery can be charged to 100 per cent in about 3.5 hours via ordinary household sockets. A three-metre charging cable is permanently installed in the vehicle and is pulled out of the passenger door for charging. In addition, Opel offers an adapter for charging at a public charging station.

The German carmaker based in Rüsselsheim is launching the Ami offshoot in three equipment lines: Opel Rocks-e, Opel Rocks-e Klub and Opel Rocks-e TeKno. Opel has not yet revealed the different models, but it is clear that the Rocks-e closely follows the French original in terms of design. Although this starts with the small, specially designed 14-inch wheels and ends with the bonnet, the rear and the panoramic roof cannot be opened. Instead, access is via the two wide side doors, with the identical doors opening opposite directions: opposite on the driver’s side for easier entry and classic on the passenger side.

Finally, a German addition is the new Opel-Vizor brand face, complete with LED headlights and indicators. Despite this, there is not much resemblance to the front of the Mokka-e, which also bears the Opel-Vizor. So again, a look at the sister model is helpful: the Opel logo instead of the Citroën logo and the colour scheme are in principle the most obvious frontal differences between the French original and the offshoot.

The Stellantis subsidiary in Rüsselsheim has not yet commented on the price. The announcement only states that the price will be “significantly below that of a small car and the leasing rate will be at the monthly level of a public transport ticket”. In France, the Ami costs 6,000 euros. There, too, the comparison with public transport was used when it was launched last year with a view to the leasing rate.

“Our new Opel Rocks-e is uncompromising in every respect: its design is clear and bold, its dimensions are extremely compact, its drive is purely electric, and its price is unbeatable,” says Opel’s Germany boss Andreas Marx in their German announcement. “Our SUM (Sustainable Urban Mobility, editor’s note) enables smart and functional electric mobility for everyone – and will cause a sensation with its styling. Moreover, Opel is approachable, simply human and cool at the same time – the new Rocks-e underlines this once more.”

The launch of the Rocks-e may also be a reason why Citroën has postponed the introduction of the Ami in Germany. Originally, the light vehicle was to be launched in Germany in the first quarter of 2021. However, a few days ago, InsideEVs reported an enquiry to Citroën that the French company wanted to introduce the vehicle in Europe in several phases and concentrate on other countries first. The reason given by the carmaker is that demand is particularly high in France, the Benelux countries, Spain, Italy and Portugal and that they, therefore, want to focus on these countries first before introducing the electric car in other countries.

Mazda to launch the MX-30 in California in autumn