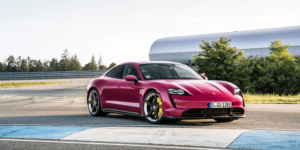 Porsche has made some changes to the Taycan and Taycan Cross Turismo for the new model year. Vehicles built from September onwards will have more range for everyday driving thanks to technical optimisations.

The upgrades include the deep integration of Android Auto into Porsche Communication Management (PCM) and Remote Park Assist for the 2022 model year. The latter is an optional extra with which drivers can control parking via smartphone.

The deep integration of Android Auto is supposed to give users of a smartphone with the Google operating system a comparable range of functions to iPhone users – until now, the Taycan only supported Apple CarPlay. With Android integration, “selected phone functions and smartphone apps that do not impair driving safety” are to be available via PCM or Google voice assistant.

“The latest generation of Taycan impresses with seamless smartphone connectivity, which now includes Android Auto,” says Kevin Giek, Head of Taycan Series since April. With the change to the 2021 model year, Porsche introduced the Plug&Charge function, among other things, in October 2020.

Porsche says there will be a range increase that is important “in everyday life”, but since the new model year will not be homologated separately, these given values will remain with the known WLTP values. For this reason, Porsche has not given any figures on the range increase.

The changes mainly affect the all-wheel drive models, which means all versions except the base model. Here, in the driving modes Normal and Range, the front electric motor is almost completely decoupled and de-energised in the partial load range. The motor behaviour has also been optimised when coasting and at a standstill in order to reduce drag losses of the permanently excited synchronous motors. If the driver demands more power or switches to one of the sport modes, the disconnected motors are switched on again “within milliseconds”, according to the German luxury carmaker.

There is also a small change in fast charging: the Turbo Charging Planner can now preheat the battery a little more than before. With the higher temperature, the battery should be able to be fast-charged earlier and at a higher state of charge – in other words, a typical improvement in the charging curve. In addition, Porsche says it has improved the electric sportscar’s thermal management: the waste heat from the electric components is used even more for the temperature control of the battery.

To announce the updates, Porsche exclaims “more range, more connectivity and more colours.” If driving an expensive luxury electric car wasn’t enough to stand out, Porsche is offering more options in this regard. In addition to the 17 standard paints, there will also be the options “colour of choice” and “colour of choice plus”. The former expands the range by 63 paint colours, including brand-typical colours from the 1990s such as moonlight blue metallic, acid green, star ruby, riviera blue or viola metallic. With “colour of choice plus”, Porsche gives “the customer almost complete freedom in the choice of colour.”  Prospective owners are likely to pay handsomely for this freedom.