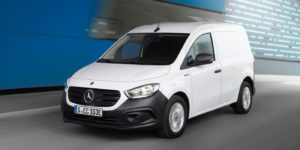 Mercedes-Benz has presented the new Citan and its electric offshoot eCitan. The Citan will be the last new Mercedes van with a combustion engine. At the market launch in September, the combustion engines are still alone, because the eCitan will not be launched until the second half of 2022.

At the premiere at the Caravan Salon, Mercedes-Benz Vans did have a camper conversion of the Citan, which was equipped with a small kitchen and double bed together with the company VanEssa mobilcamping. However, the van will not (yet) be electrically powered: the electric version will not follow until 2022.

“With the Sprinter and Vito we are successful in the large and midsize segment. The new Citan completes our portfolio as a small van. It has been completely redeveloped by professionals for professionals,” says Marcus Breitschwerdt, Head of Mercedes-Benz Vans. “At the same time, the Citan is the last new vehicle project for commercial customers of Mercedes-Benz Vans with combustion engines. All future new developments will be available exclusively with electric drive. The logical step in this consistent electrification is the new eCitan.”

The continuation of the partnership with Renault is also consistent: Breitschwerdt emphasises that the new Citan has the “DNA of Mercedes-Benz” “from the unmistakable design and driving behaviour to safety and connectivity”, but at its core the Citan, like its predecessor, is a Renault Kangoo. While the Mercedes characteristics may come into play in the driving behaviour and the interior, what Breidtschwerdt did not mention in his list is striking: the drive.

In the case of the eCitan, the data now given by Mercedes matches that given by Renault for the Kangoo Rapid E-Tech Electric: A front-mounted electric motor with 75 kW of power and a maximum torque of 245 Nm provides propulsion. In its statement, Mercedes only specifies that it is a separately excited synchronous machine (FSM).

The lithium-ion battery, which is installed crash-protected in the underbody in front of the rear axle, offers a usable energy content of 44 kWh, as in the Kangoo. The pouch cells are installed in eight modules.

The battery can be charged with up to 75 kW DC. In the optimum case, the charging time from ten to 80 per cent is “expected to be around 40 minutes” – Mercedes does not want to be more specific about this about a year before the market launch. Perhaps the charging curve can be optimised by then. For AC charging, an 11-kW onboard charger is installed ex-works; a 22-kW charger can also be ordered for an additional charge. The duration of a complete charging process is then reduced from 4.5 to two hours. The charging port is located in the front behind the Mercedes star.

Up to 20 kilometres more WLTP range than the Kangoo

As with the charging time, Mercedes is not yet specific about the range of the e-van. According to WLTP, this will “probably be around 285 kilometres”. As the eCitan does not yet have EC type approval, Mercedes-Benz Vans is not yet able to give final data for the production model. At 285 kilometres, Mercedes could beat the WLTP range of the Renault Kangoo by at least 20 kilometres; the French vehicle is stated to have a range of up to 265 kilometres. In the end, the exact equipment and body variant, as well as the driving profile, will probably be more decisive than 20 kilometres of the standard range.

There will be two driving programmes in the eCitan: “Comfort” as the standard setting and the range-optimised “ECO” mode – but here, for example, the engine output is reduced to 55 kW. Incidentally, the top speed is 130 km/h. In addition to the two driving modes, there are three recuperation levels (D-/D/D+), which means that the driver has six possible settings.

The “Mercedes DNA” should come through more strongly in the chassis (MacPherson axle at the front, twist-beam axle at the rear). “During the extensive testing, the Citan’s suspension, damping and stabilisers were carefully matched to each other,” Mercedes writes. “The developers at Mercedes-Benz placed particular emphasis on driving behaviour typical of the brand, defined as a balanced combination of ride comfort, driving dynamics and driving safety.” One example: in the Citan Tourer, the spring rate and the damping force of the shock absorbers have been adjusted, and the stabiliser on the front axle has also been strengthened to reduce lateral tilt in bends.

As the market launch of the eCitan is still about a year away, Mercedes does not want to give any concrete information on the body variants yet. For the premiere of the series, it is only said that the all-electric Citan will also be available “in various body variants”. The two standard-length versions of the panel van and tourer, which will be available at the start of the combustion models, are likely to be the norm – a mix is to follow later for the combustion models.

The new Citan is 4.50 metres long – 4,498 millimetres to be precise – and has a wheelbase of 2.72 metres. Even in this version, the Citan is supposed to offer more space than its predecessor. So far, Mercedes has indicated a load volume of up to 2.9 cubic metres. Partner Renault shows what is possible in a potential long version: up to 4.6 cubic metres are possible in the Kangoo E-Tech Electric.

However, both models have one important feature in common: as the battery and electric motor have been seamlessly integrated into the vehicle, there are no compromises in terms of space in the EV version compared to the combustion models. Mercedes emphasises that all optional equipment is also available in the eCitan.

As is typical for commercial vehicles, there are many of these – so that customers can adapt the vehicle to their needs in terms of bodywork alone. The requirements of a craftsman differ from those of a delivery service or people carrier. One example is the sliding doors: in the Tourer they are standard on both sides, while the panel van only has one on the passenger side – the one on the driver’s side is optional. Both sliding doors offer an opening of 61 centimetres, in height just under 1.06 metres. Incidentally, the Citan does not offer the special opening on the passenger side without B-pillar of the Kangoo.

Further examples of customisation can be found on the rear door. The panel van has rear doors ex-works, both parts can be locked in a 90-degree position and swivelled to the side by up to 180 degrees. The rear door is optionally available with a heated window and windscreen wiper. Or the customer can opt for a tailgate. For the Tourer, it’s the other way round: the tailgate is standard, but a rear door is available as an option. Incidentally, the loading sill is 59 centimetres above the ground.

Instead of the 3.05-metre load compartment of the panel van, the Tourer offers a bench seat with three places. It can be divided 1/3 to 2/3 and folded down. There are no removable individual seats in the rear, as in the panel vans of the Stellantis brands. Mercedes-Benz has announced a trailer coupling for the eCitan. At present, the Stuttgart-based company does not provide any further information on towing capacity or drawbar load.

Combustion-powered Citan starts at 23,800 euros, prices of the eCitan not yet known

Mercedes also does not yet comment on the equipment of the eCitan in the announcement. The combustion models will be available in the “Base” and “Pro” lines. However, it seems that the eCitan will always be equipped to a higher standard than the simple combustion engine versions: On the press photos published by Mercedes, the MBUX system with touchscreen can always be seen in the interior of the eCitan, the simple radio does not seem to be available here.

As far as prices are concerned, there is not even the full list of combustion models at the premiere. Mercedes only mentions a base price of “probably” 23,800 euros, which would put the net list price relevant for commercial customers below 20,000 euros. Incidentally, with the base price of 23,800 euros Mercedes positions the Citan exactly at the value of the Renault Kangoo. However, it is not yet known how expensive the electric version of the French vehicle will be.

The eCitan, even as a tourer, is not intended for private customers. Here Mercedes will bring the EQT (for the combustion models as T-Class). The Swabians had already shown a Concept EQT, but this was considerably longer at 4.95 metres. Technical data were not available at that time. With the eVito, eVito Tourer and EQV, Mercedes has shown that they can certainly offer electric drives adapted for commercial and private customers. It is not yet known whether the EQT will have a different drive than the eCitan.